How to get information about layers using Arcpy

I have this layer structure in ArcMap: 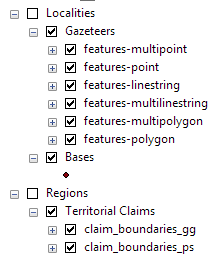 "Localities, Gazeteers, Bases, Regions, and Territorial Claims are all Group Layers. All others under these are layers. I have a script that uses the Arcpy Describe method to go under each layer and get its full directory path. Here is the script:

This would return something like: C:/Folder/Subfolder/layer.shp Now, I am trying to figure out a way to get the path of each layer relative to the map. For example, for layer "features_multipoint", I need the script to report something like this:

The Describe method seems to not provide such capabilities.

Not the answer you're looking for? Browse other questions tagged arcgis-desktop python arcpy or ask your own question.