Remove duplicate feature based on Condition

I have a line dataset that was produced from ModelBuilder (not built by me) that involves splitting lines into individual segments using existing Point dataset in between as the split zone. However, the process has a little "flaw" and it created two extra duplicates that retains the incorrect attributes from other Point on the original line. 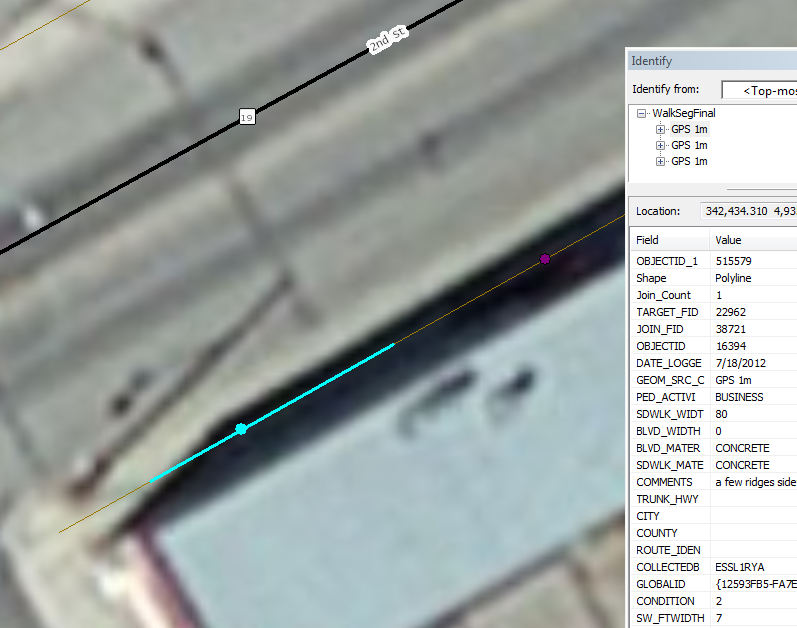 If you look to the far right of the table, the Shape_Length are identical, but the 3rd from the top is the only attribute that is correct based on its location. The other two lines have CROSS_PRCN and LENGTH taken from the purple Point to the right on the same original Line shown in Figure 1 which I want to remove.

Is there any way to remove the other two lines that have the incorrect attributes? There are over 600,000 line segments so I can't remove them manually. I tried using Delete Identical but because of their identical shape length, it doesn't select the ones I want to remove correctly. The single Point has one field (SplitID) that matches the correct Line segment but I'm still quite an amateur at GIS so I don't know if there is a tool that can select matching attributes from two dataset and delete the duplicates.

If I understand your question correctly, you may try this:

Not the answer you're looking for? Browse other questions tagged arcgis-desktop arctoolbox feature-class or ask your own question.

6
How to find and delete identical points?
8
Merge Spatially Coincident Features in the Same Feature Class
1
Converting Points to Lines in ArcGIS Desktop and retaining attributes of both start and end points?
4
Intersecting overlapping polylines using ArcGIS for Desktop?
2
How to calculate proportion of a line segment around a point?
4
Deleting overlapping lines using ArcGIS Desktop?
3
Spatial Join Ouput Attributes Differ Based on Input FC or SHP
0
How to remove only a single point after using the Integrate tool
1
Creating polyline output from overlapping polylines in ArcGIS