What would be the best flow routing algorithm for determining the quickest (and by this I suppose I mean shortest) path that a spill would take when traveling to a stream?

My best educated guess would be that the D8 would provide the quickest path for a spill traveling from land to the stream. It minimizes dispersion (which would most likely slow the spill down) and maximizes velocity (ignoring surface friction due to different landcover types - if this can be ignored) by choosing the steepest path.

The end application would be in determining the overland flow path from a spill site to a stream/river reach that provides the earliest possible time for entry of the spill into the stream/river. There are different assumptions or starting datasets that could change the answer. For instance, a 30m digital elevation model (DEM) cold prove useful in a forested or agricultural area, but a 1m or sub-1m DEM might be necessary for sorting out the true flow path (and therefore the true shortest path) in a highly urbanized area. In either of these cases, however, once one has a DEM that he/she feels represents the terrain well enough for an analysis, which algorithm should they choose?

This query is borne out of trying to avoid calculating the distance from the spill to the stream/river reach using simple straight line geometry in a GIS tool, such as the proximity toolset in ArcMap.

Does anyone have any experience with this?

EDIT: Based on the responses so far, it seems that using a routing algorithm that allows for dispersion, and then calculating the shortest path out of the possible paths predicted by the algorithm, might be the solution I want. In the answer suggesting the use of TauDEM, the journal article that is linked to contains this image: 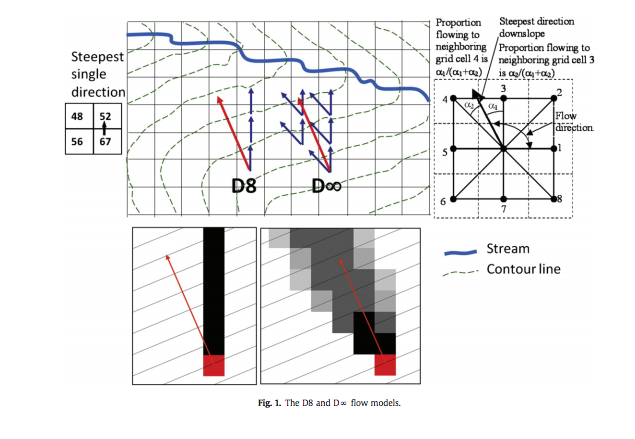 Examining the predicted flow path of the D-Inf algorithm, we see that several different paths are possible. Using such an algorithm, I suppose on could calculate the shortest path, the longest path, and a range of other statistics on the predicted pathways. If similar or near identical ground cover is found across the different pathways, then some combination of steepness and path length may dictate the quickest path? Which might be different from the shortest path? I'm starting to think I have to review my question and/or thought process - it may be necessary to incorporate equations/models governing the speed of overland flow along side the algorithms that examine possible flow pathways. I need to keep reading and ingesting the article, but I think that the answer lies within the ideas presented in the article - so for now I will mark the suggesting answer as correct.

The software uses both D8 and so-called D-infinity (D∞) flow models, which is best illustrated on Fig. 1 of Tesfa et al. (2011). You can test which flow path method is quicker or more accurate for your area. Furthermore, both serial and parallel processing with any number of CPUs is supported. Section 2.2 of Tesfa et al. (2011) linked previously covers much of your questions of flow routing distances down to a stream (end point cells).

I have solved a similar problem for a municipality where if a water main breaks they wanted to know where the water goes and what infrastructure, streams, etc. are going to get impacted. If you are using ArcMap then you can use the Cost Path geoprocessing tool. Tool parameters:

Not the answer you're looking for? Browse other questions tagged algorithm routing taudem or ask your own question.