Apply Symbology from Layer in ModelBuilder?

I have a model in ModelBuilder that takes a shapefile, runs some tools on it, adds it to a geodatabase, applies symbology from a layer file and converts it to a KMZ. It all works fine except for the "Apply Symbology from Layer" tool.

I created a smaller model for testing the problem sections which is shown below. The original input feature class is a geodatabase. When I run this model, it runs and says it completes successfully, however my symbology is not applied to the layer.

The Input Layer and Symbology Layer are both point files, so that should not be the problem. When I manually import the Symbology Layer (outside of ModelBuilder), it displays fine, so I don't think it's an issue with the layer file.

I tried to revise my model based on suggestions from Mapperz and MollyS. Here is my revised model and screenshots of the two Properties windows but I am still unable to get a KMZ with the symbology. Any ideas what I am doing wrong? 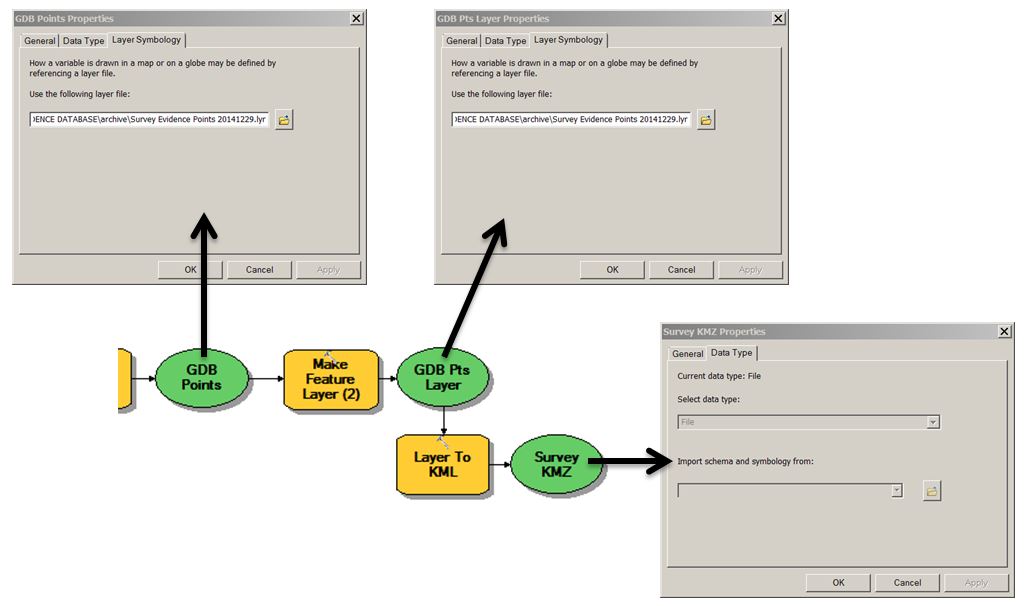 Is there a reason you have to use the "Apply Symbology From Layer" tool? I usually do this through the context windows. You can set the layer symbology for the output "SurveyEvidencePoint" by right-clicking "SurveyEvidencePoint", selecting properties, and then setting the path to your layer file.

Not the answer you're looking for? Browse other questions tagged arcgis-desktop modelbuilder symbology arcgis-10.3 or ask your own question.