I'm downloading the MODIS derived Albedo 16-Day L3 Global 500 m resolution product. I expected to have a dataset for dates every 16 days. Instead I have datasets every 8 days as can be seen in the image I uploaded.

The info on the product (link) does state:

So every 8 days a dataset is released which contains the previous 16 days of data? so each of these datasets have a data overlap of 8 days? 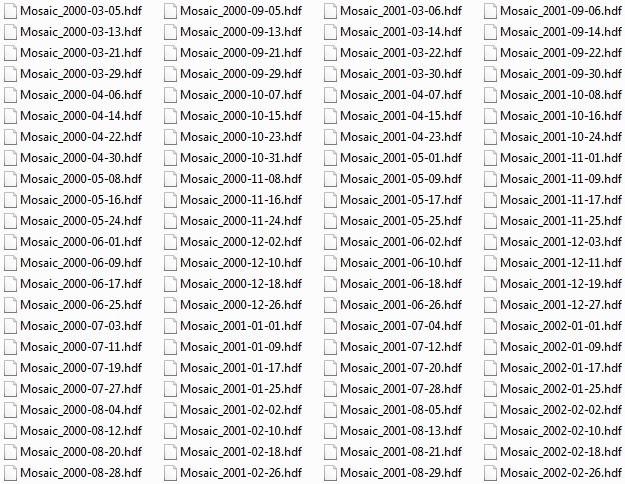 Most surfaces reflect anisotropically, so their reflectance varies with the angle between illumination and viewer (ie, Sun and MODIS sensor). MODIS's wide swath means that it is able to view every location on the ground every day, albeit from different orbit tracks (which have a 16-day repeat interval). Observations recorded from these sets of 16 different look-angles, from the MODIS sensors on both the Terra and Aqua satellites, are used to approximate the variation of reflectance with relative illumination / viewing angles (described by the Bidirectional Reflectance Distribution Function, BRDF). So each dataset release provides albedo estimates based on the BRDF approximation built-up over the previous 16 days. These sets are overlapped by 8 days - so for example, if the first release is on the 17th January, derived from observations taken from 1st - 16th, then the next will be on the 25th January, using observations from 9th - 24th.

The link is telling you exactly that.

Not the answer you're looking for? Browse other questions tagged remote-sensing imagery modis satellite or ask your own question.

2
Strange behaviour of MODIS 17A3 NPP values when converting from .hdf (downloaded files) to .vrt to .tif in QGIS
1
Time Series Extraction of Modis LAI product (every 3 days a new satellite image) in small study area