Subtracting out slope (in general) of DEM using ArcGIS for Desktop?

I'm searching for a solution process to subtract out the slope of a DEM like this: 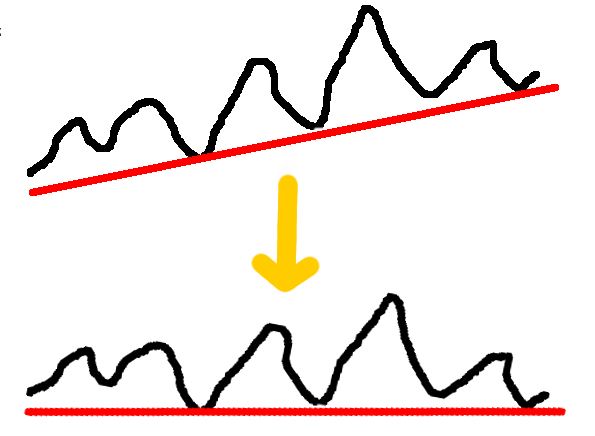 I have a high resolution DEM and want to reconstruct historical/old/not active parts of a river. The problem is the trend of the whole area. Structures from different areas are at different highs and its not possible to describe/visualize the whole area in the same way. So my idea is to adjust all highs to solve the problem.

Subtract the trend surface from the DEM. 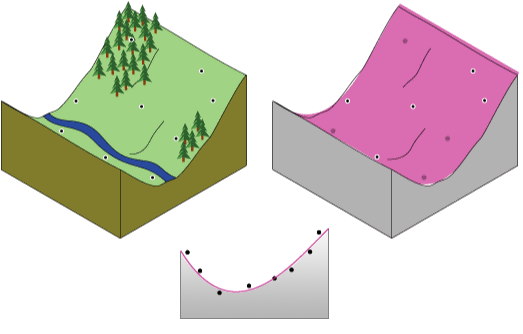 Per @radouxju's comment - the trend line can be shifted down to avoid negative values by adding the minimum value.

In the Raster Calculator:

Where: N = Minimum raster value in the DEM

Didn't notice this was an old post that got edit-bumped until I'd written all this out, but oh well:

Trend surface is good. The closest tool I can think of to OP's sketch is SAGA-GIS' 'Standardised Height' in the tool 'Relative Heights and Slope Positions'. This basically normalises your whole raster on a 0-1 scale and then multiplies the original DEM by that factor, but its got some local weighting factors built in that aren't well documented. I've found the default output useful, though.

SAGA also has a few other interesting tools:

Height Above Nearest Drainage is a bit more sophisticated than simple height above base and has been used in combination with slope to classify terrain. The original work was done using some freeware GIS the Brazilian government built, which is kind of a black box. You can get an almost identical result in GRASS-GIS by chaining the r.stream.extract and r.stream.distance modules. You need a hydrologically corrected DEM for that kind of approach, though.

Another cool GRASS add-on is r.geomorphons, which can give you terrain basic shapes (upper slope, flat, footslope etc) very quickly but doesn't give you much info about relative elevation. There's a rather good intro-to-GRASS tutorial that uses it.

Not the answer you're looking for? Browse other questions tagged arcgis-desktop dem raster-calculator elevation slope or ask your own question.

5
What special values can be included in the Con tool's conditional statement?