How do you add the Configurable Map Viewer (CMV) widget icons like the screenshot below?

What I did to add Icons was add <i class="icon-large icon-globe"></i> to the title in the viewer.js 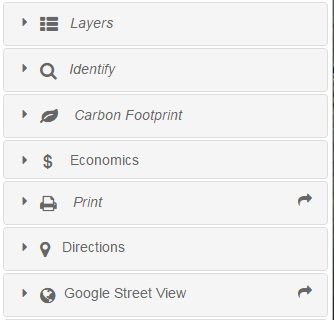 These icons are added via css. Here is an example for the print widget:

The two css classes shown are for the widget when configured as a titlePane or a floating widget type. Some of the images like the print one used in that screenshot are from located with the cmv widget. Many of the cmv core widgets do not have their icon in the widget's folder. In this case or for a custom widget, you would need to use your own collection of icon images.

Note that the example css above uses an image that is no longer used by the current version of CMV and will be removed in a future release. The Print widget now uses Font-Awesome icons so the css would need to change use Font-Awesome (I don't have an example of this) or point to your own icon images as noted above.

Not the answer you're looking for? Browse other questions tagged configurable-map-viewer or ask your own question.