I am trying to create biomass map using Kriging from ground sample point.

I have about 150 and 53 point plot for dense and sparse strata.

The data is not normal so I have transformed it.

After running the kriging, the predicted and the measured line does not look right, also the QQ plot between normal value and standardized error is not normally distributed?

What are the options to address this issue and how can I figure out which kind of kriging is best to calculate biomass? 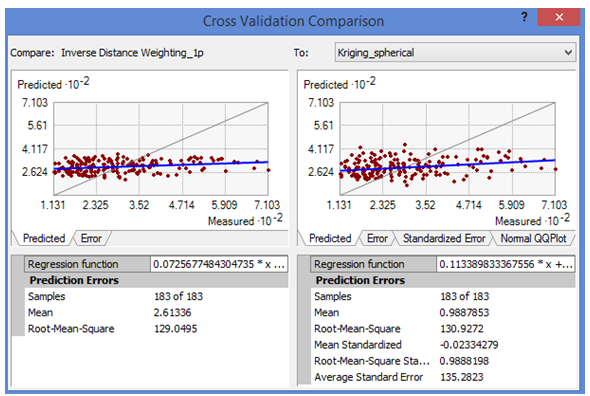 One possibility underlying the poor kriging performance could be the field plots (location and sampling intensity) failing to capture the spatial autocorrelation (or spatial dependence) in the data.

The best kriging method depends on the nature of the variable which is being studied and the type of auxiliary data available. For example: if the data is stationary (i.e., it has a constant mean), simple kriging (known mean) and ordinary kriging (unknown mean) are suitable options. On the other hand, if data is non-stationary, one option can be universal kriging. Those are types of univariate kriging.

An alternative approach would be the multivariate kriging (for example: co-kriging or regression kriging). Such methods use information from auxiliary data to enhance the capacity of spatial modelling. In the case of forest biomass, examples of auxiliary data (and auxiliary variable) are: satellite imagery (NDVI) and LiDAR (height percentiles).

The regression kriging technique for example, have one advantage which is to perform better predictions outside the sample (extrapolation), because part of the model will depend only on the relationship between the response variable and the auxiliary variable (i.e., it will not be entirely dependent on spatial variation of the data).

One interesting article about this topic (forest biomass and different kriging approaches) is:

Not the answer you're looking for? Browse other questions tagged cartography interpolation spatial-statistics kriging forest-ecology or ask your own question.

43
Open source methods for kriging?
8
How to choose raster interpolation method?
3
How to map Traffic Count Points to Streets?
6
Dealing with data which are not normally distributed when kriging?
1
How kriging variance is calculated in R gstat?
8
Coarse Woody Debris extraction