ST_INTERSECT of each element of two tables (polygons, lines)

Im new to postgis and trying to solve the following problem:

I need to find out the id of all polygons on each line and fill them in new columns. So for each intersection there should be one new column in the table of lines with the id of the intersecting polygon. there wont be not more than three polygons on lines.

This is the code I already have, but it just gives just the first polygon that intersects with the line. 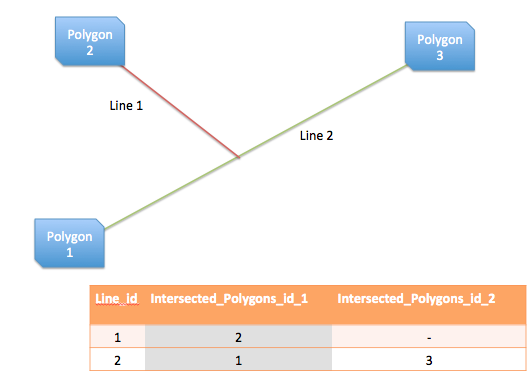 Working on the assumption that the polygons are only ever going to be at the end of lines, your query should return each polygon from your diagram, but not in the format you have indicated. This makes me think that you have a small gap between your polygon and the end of the line. I think the tolerance is 0.00001 for ST_Intersects.
Rather than using ST_Intersects to determine the relationship, you could use ST_Distance. Another option would be to buffer the line (or endpoints) slightly using ST_Buffer. The buffer is probably the best option performance wise.

I have also put in the ST_Distance join clause in as a comment.

Edit As per your comments, polygons may exist along the line. There is a number of ways of doing this query, but unless you know the maximum amount intersections that will happen having the output rows in the format that you have specified will be dificult. Here's a couple of options

Not the answer you're looking for? Browse other questions tagged postgis postgresql openstreetmap or ask your own question.

16
Is there a PostGIS function for determining whether a linestring intersects itself?
1
Point of intersection issues with PostgreSQL/PostGIS?
2
Inserting union of two tables into another table using PostgreSQL?
10
Split lines into non-overlapping subsets based on points
1
Select Polygon Intersections Between Two Tables With No Common Key
5
Join two tables completely on geometry (postgis)
1
Parting lines based on intersection with polygons
4
Counting lines in polygons in PostGIS