From a large .osm/.o5m file (for India), I only want to extract the data that would actually show up when one is looking from zoom levels 1/0 through 8 (which is quite zoomed out.. only major cities, highways, geographical regions and coastlines). See screenshot, of a much smaller area loaded in Maperitive, seen at zoom level 8: 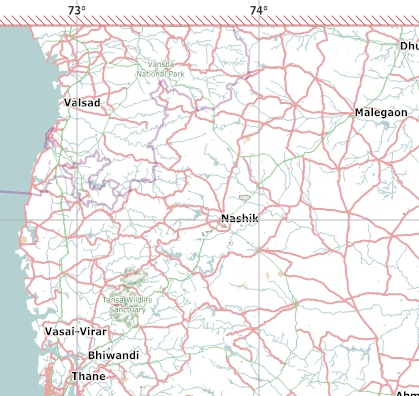 The extracted .osm would then be much smaller in size, and I would be able to load it on Maperitive/other for just basic-zoom-levels rendering. I'm working with India's .osm downloaded from geofabrik.de. The .osm (with author and version info dropped) currently weighs over 3GBs.. impossible to load on my end, and we don't have access to any super-ish computers. Basically I want to get rid of all data that wouldn't show up at zoom level 8 or higher anyway. I'm working with osmconvert / osmfilter / maperitive, on Windows. Would prefer working with these simple portable apps and not get into postGIS databases etc, in the interest of making this doable for more people.

My understanding is that the data in the OSM file isn't tagged by zoom level; that there are algorithms and map styles that decide what gets displayed and what doesn't. So, it would be great if I could get a list of objects to --keep using osmfilter or similar. I don't want to do any major customization to the regular OSM rendering, and don't need to religiously stick to it either. Example, from the wiki page:

What source should I be looking up to get this --keep list?

I suggest to go through the Mapnik style definition file. These can be:

Look out for the items that are used for low levels, and keep those.

For the zoom levels 0 to 5, Mapnik uses coastline shapefiles and Natural Earth data as well. What you will not get is the Postgis roads table with simplified geometry of roads to speed up rendering of low level tiles.

You might safely drop all amenities, buildings, trees and bus stops.

In addition to what AndreJ said, it might help to use osmconvert to determine which objects are large enough to be displayed at a requested zoom level. The --add-bboxweight-tags will help you:

--add-bboxweight-tags This option will add the binary logarithm of the bbox area of each way and each relation. For example: <tag k="bBoxWeight" v="20"/>

There are two other -add-bbox-* tags if the bboxweight tag should no suffice:

To get help, enter osmconvert --help

One small hint concerning osmfilter: Filtering will work faster if you convert the .osm file to .o5m prior to using osmfilter.

Not the answer you're looking for? Browse other questions tagged openstreetmap large-datasets create or ask your own question.

1
API for getting only "essential" OSM source data for large zoom levels?