This must have been asked before, but I can't find the exact answer and my attempts so far have not worked. Most of the overlap questions I see are for calculating the area of overlap for portions of polygons or points in polygons. I want to do something that should be simpler: count overlapping polygons from separate feature classes.

I have 100 separate feature classes, each representing the occurrence of a single species. They all use the same polygon template (based on sub-watershed boundaries), meaning that when more than one species is found in an area the polygon (sub-watershed) for those species' feature classes are perfectly aligned (overlap by 100%, exactly). Note: although not as efficient for disk storage, this is how the data was provided, rather than relating tables of species data. 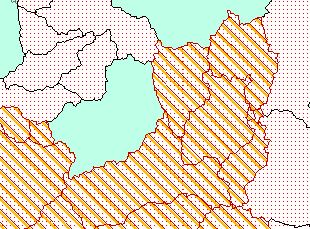 Example of overlaps: Each color (blue, red dots, orange lines) each represent one species. When they overlap, e.g. red and orange, there is a perfect overlap of polygon boundaries.

What I want to do is count the number of species recorded for any given location, i.e. count the number of times a polygon overlaps and associated this with a specific polygon location. The area of overlap is not relevant in this case, just the count. With a raster, this would be equivalent to setting each layer's cells to have a value of 1, then summing. Is there a simple way to efficiently batch/automate this with 100+ vector features, without converting to raster?

So far I have tried using this count overlaps model. However, this resulted in an m-aware error, which seems unrelated. I am now running union, which has been progressing for a few hours without completing. Since I may try and run this with 1,000+ feature classes in the future, I was trying to find a more efficient way to complete the analysis. There must be a very simple way to do this, something that I am overlooking.

Have you looked at Spatial Join?

Make the sub-basins the 'target features', the species polygons the 'join features' and then Spatial Join should generate a field Join_Count that simply gives the number of joins that matched each target feature.

You can join one-to-one and get the Join_Count directly. If you wanted to retain information about which species were matched to which sub-basin, you can do a one-to-many join (you end up with a record for each species) and then calculate the frequency of each sub-basin in the final table.

Not the answer you're looking for? Browse other questions tagged arcgis-desktop spatial-analyst overlapping-features or ask your own question.

17
How to improve cartographic visualization of overlapping polygons?
3
How many A features that fall both in the B polygons and C polygons are for each C polygon?
1
Count the number of polygon features within a polygon
1
Calculating Feature Overlap Area within Single Shapefile
0
Automatically fix overlaps by weight/occurrence
3
“Join Attributes by location (summary)” only with more than 50% of overlapping area
1
Overlap area of features from same feature class
0
Using FME to compare multiple polygons (AreaOnAreaOverlayer)