I'm using this code as a python script tool in ArcGIS 10.1:

All it's supposed to do is add a field to some feature classes in a database. I double checked that the path is right, so I don't think that's the problem. This code has also worked before, but for some reason it's not working anymore. I get an error that says this when I run it: 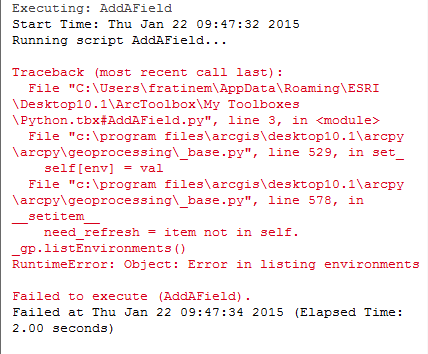 Code works fine with single quote on my machine. I think it is something to do with gdb naming, (& character?). See if slightly modified code will help to track what's wrong

Not the answer you're looking for? Browse other questions tagged arcgis-desktop python arcgis-10.1 or ask your own question.

3
From text data create a FeatureClass with table with python
5
Randomly select a record to update using arcpy.da.UpdateCursor
5
Converting Vertices of Polylines and Polygons to Points and Maintain Attributes
5
Efficient way to use a CSV to Define a Feature Class
0
Python Scripting Displaying Incorrect Names after Join Field
0
Iteratively Filling a Dictionary and Updating a Feature Class