R Spatial: Trouble with disjointed polygon that has self-intersections

I have a shapefile which represents the areas of a city which have higher risks of flooding than others. This is a spatial polygon object however the polygon is disjoint and not connected. I also have a database of house locations in the city, and I want to develop a dummy variable to determine whether a house is located in any one of the disjointed parts of the polygon.

I've used the gContains(polygon, points) however I get the error

Which I imagine has to do with the fact that it is not one single polygon but multiple fractions of the same shapefile polygon spread out over the city. Here is a picture of the problem I'm having. The blue areas representing the disjoint polygon and the points being those which I would like to determine if they are located in any of the shaded blue region. For completeness, I've also included the underlying city map. 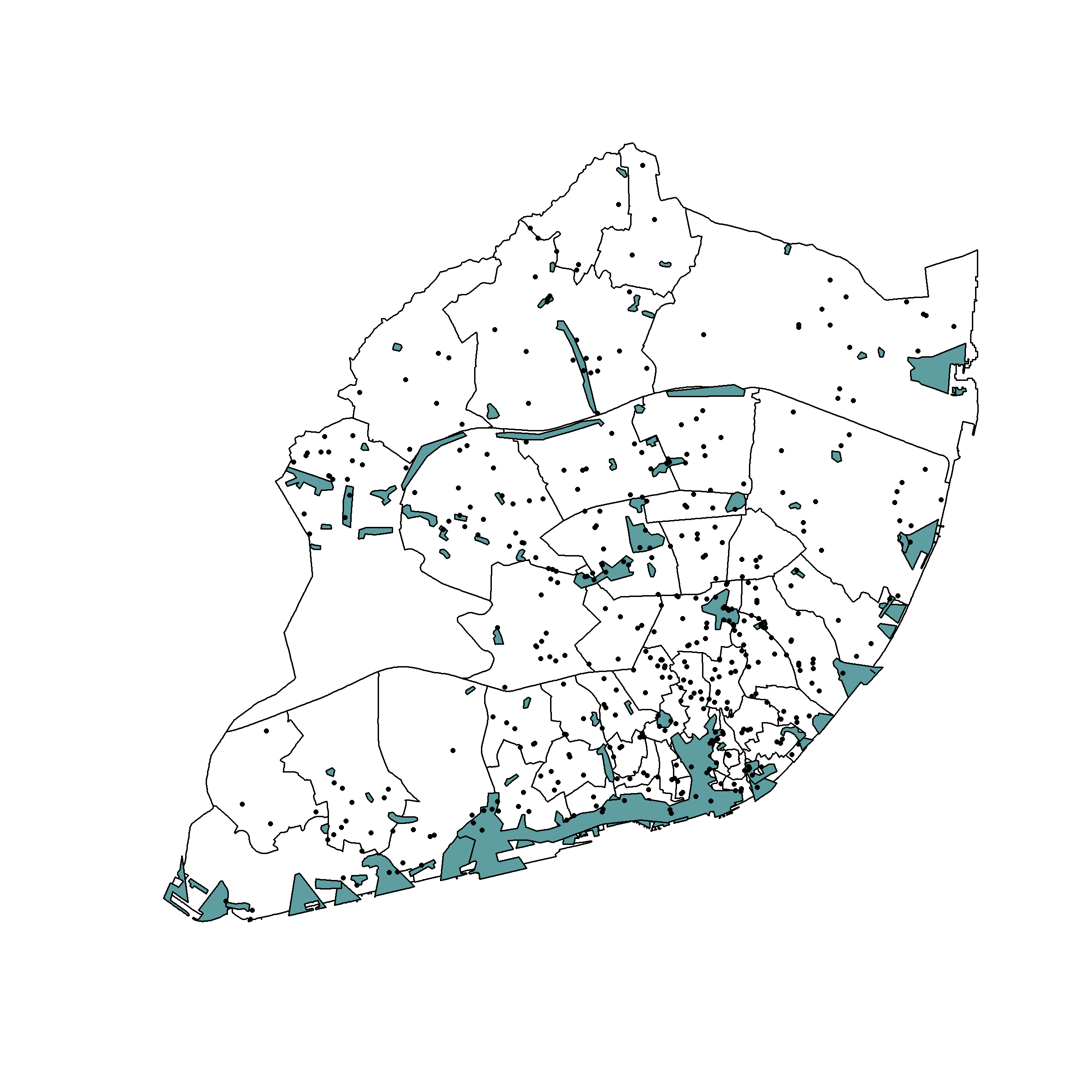 Maybe the gContains is not the best function to use, but I haven't been able to come across anything to help me out. Happy to share the shapefiles and selection of the points database if that helps.

After running the "Check Geometries" in ArcGIS I see there are several self-intersections of the polygon. I ran the "Repair Geometries" and exported the resulting repaired shapefile to upload into R, however still get the same error message as before. Since these shapefiles were obtained from an external source, it may be that the files are not built in such a way to facilitate the type of analysis I am working on.

I was able to solve the problem with a better understanding of what was occuring with the help of Self intersections for polygons, how to solve?

Exporting the shapefile after running the Union code in ArcGIS removed the errors I was having in R.

I also had this same error using gContains(). I didn't realise I had anything internal in my polygon. I dissolved the internal structure like this:

and went on to use gContains() with no problem.

Not the answer you're looking for? Browse other questions tagged polygon r or ask your own question.

13
Self intersections for polygons, how to solve?

4
Is it possible to have self intersecting polygons in shapefile?
13
Self intersections for polygons, how to solve?
3
How to do a Point to Polygon analysis with multiple variables in QGIS?
7
Can't transform lines to polygons
1
gTouches error without geometry error?
24
Getting TopologyException: Input geom 1 is invalid which is due to self-intersection in R?
2
Draw polygons from self-intersecting lines: Looking for a workaround for inner boundaries / holes
3
Determining which polygon(s) each point lies in using QGIS?
3
Ring Self-intersection at or near point