My question is similar to Merging points (bus stops) in QGIS manually or programmatically?, but it's not answered sufficiently

I have OSM-transit data with bus stops. Some stops have two or more bays for different directions. In this example, the stop 'Steinerstraße' has two points: 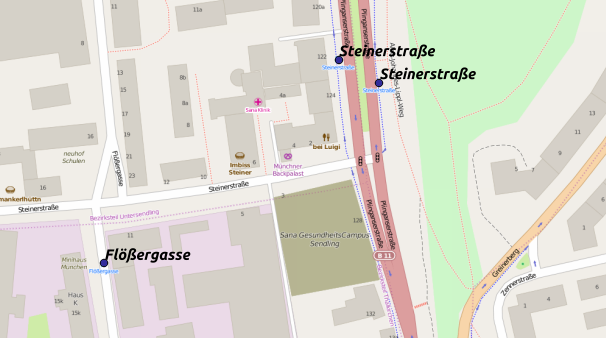 I want to merge all points belonging to one stop to one point. I assume that they can be identified by an identical name in the 'name'-column of the attribute table.

Best case would be to create a new point in the middle of the points, however, I'd be satisfied with a simple deletion of the 2nd feature as well.

Can anyone give me a hint how to do it?

I've never used either python nor SQL in a GIS-environment and would prefer a GUI-based solution. However, I'm open for everything (some xp in python and SQL in other contexts).

Not an easy task, but this way it works for me:

After executing, all busstops with the same name are connected with lines. Unfortunately, the points are also connected to themselves, leading to lines of zero length. So:

As you can see, it works for single and multiple bus stops: