This is a follow up question to this question.

I have a river network (multiline) and some drainage polygons (see picture below). My goal is to select only the headwater polygons (green). 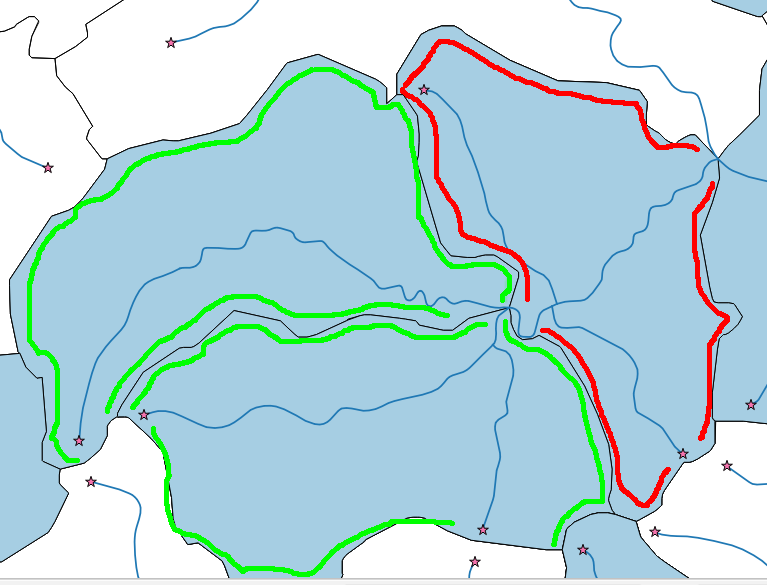 With John's solution I can easily extract the river start points (stars). However, I can have situations (red polygon) where I have startpoints in a polygon, but the polygon is not a headwater polygon, because it is flown though by the river. I only want the headwater polygons.

I tried to select them by counting the number of intersection between polygons and rivers (rationale: a headwater polygon should have only 1 intersection with the river)

, where poylg are the poylgons, start_points from johns answer and stream is my river network.

However, this take forever and i did not run it:

So my question is: How can I efficiently query headwater polygons?

Update: I added some sample data to my dropbox. Data is from south-west Germany. It's two shape files - one with streams and one with polygons.

I believe the general outline (partly tested so far) is:

An example of such a query:

These can all be combined together in a largish sequence of CTEs, unless some tables were created from the steps involving points (and indexed).

I have no idea what the runtime of this will be on a full data set, having only tested part of this on a subset, but with a spatial index on the polygons table, there will be some assistance -- it is obviously not possible to apply an index to the points that emerge from ST_DumpPoints, so a full scan will be required there, although they should be in memory by then.

This is not being posted as a full answer, but as a work in progress, and a chance to find flaws in the logic. Working queries coming soon.

This is the query I came up with, which appears to work on a small subset of your data, but runs for hours on the full dataset.

EDIT 2. While this appears to produce correct answers on a small subset, the run time on the full dataset is horrible, presumably because the final query is doing n^2 comparisons and not using a spatial index. Probable solution would be to break query down and create tables from the initial points and point in polygon queries, which can then be spatially indexed before the final step.

In pseudo code, this should work:

I'm not really sure how to build the query, and I can't test it without a database to test on. It's a pretty crazy query, I think. But it should work!

Not the answer you're looking for? Browse other questions tagged postgis postgresql query hydrology rivers or ask your own question.