How does ArcMap buffer linear features?

Two methods of selection in ArcMap that I thought would be the same are in fact not equal. I created a 3 mile buffer around a single line feature (approx 6mi in length). I'm working with parcels, as points, that should be within 3 miles of the line feature.

The missing 25 parcels are found close to the boundary of the buffer along curves.

So, how does ArcMap build a buffer around a line?

Buffers around a point result in a curve with a single vertex. The picture shows the vertices of the buffer. The parts of the buffer that are made from the endpoints are a series of connected points about 1k feet apart instead of a curve. Is there a way add curves or decrease spacing of vertices as environments in the tool? 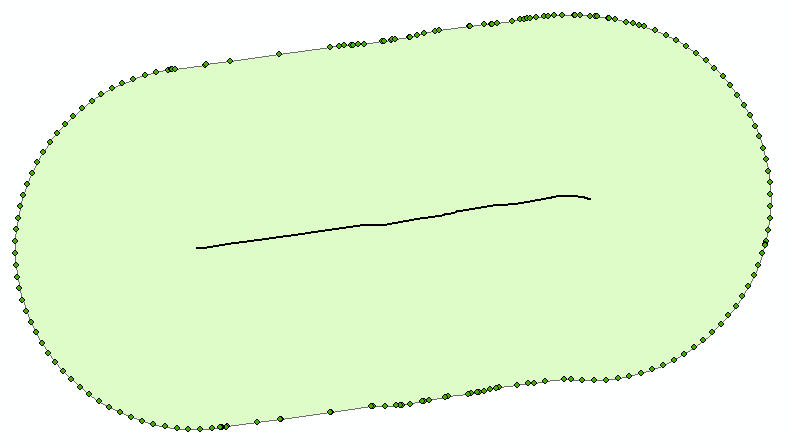 I ended up buffering all the vertices in the line feature, dissolving them, union with original buffer, dissolve those. Then selecting by intersection yields the correct count and has a difference in area of ~600k sqft.

The ArcGIS help files for the Buffer tool include a How Buffer Works page with a full description. There, it is explained that offsets are created from the line and its vertices, then connected to form the buffer. 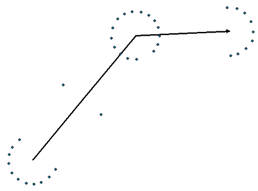 But the page also goes into detail about the difference between Euclidean and Geodesic buffering, which comes into play when working in projected vs geographic coordinate systems respectively. This includes some gotchas about how those curves around the ends are formed and distortions caused by projection. The help file specifically mentions using the Densify tool to increase vertices around the end curves in some cases (rather than an environment setting).

Not the answer you're looking for? Browse other questions tagged arcgis-desktop arcgis-10.2 buffer or ask your own question.

1
Buffering line in ArcMap is creating smaller buffer than expected?

2
Break down geoprocessing operation (Buffer) into smaller subsets
8
Tool that modifies number of vertices but not the feature itself
1
Spatial Query between polyline features and point features within specified Buffer
2
Ratio of area between park and residential parcels
1
Buffering multiple features with Geoserver WPS
0
Identifying any gaps "broken span" in network of ducts using ArcGIS for Desktop?
3
Buffering a curving line results in polygon overlaps and gaps
3
Combining ST Buffer and Intersect with Where clause