I am using Focal Statistics in Spatial Analyst of ArcMap10.2, and use the wedge type of neighborhood for a radius of 10 km around each processing pixel. I want to calculate the maximum elevation for four sectors of aspect which are: Northeast, Southeast, Southwest, and Northwest, which in degrees would mean 0-90, 90-180, 180-270, 270-360 respectively, If 0 degrees were on the north and the wedge would extend clockwise. Of course, as I have read from the ArcGIS Help, "The wedge extends counterclockwise from the starting angle to the ending angle. Angles are specified in arithmetic degrees from 0 to 360, where 0 is on the positive x-axis (3:00 on a clock)". Nevertheless, what I have observed is that 0 degrees are placed on the west (9:00 on a clock) and the wedge extends counterclockwise (90 degrees placed on 6:00 o clock, 180 placed on 3:00 o clock, 270 placed on 12:00 o clock). To be more precise, the images below depict a part of my region. The first image has a wedge with start angle at 0 degrees and end angle at 90, the second has an angle of 90-180, the third 180-270, and the fourth image has an angle of 270-360 degrees. 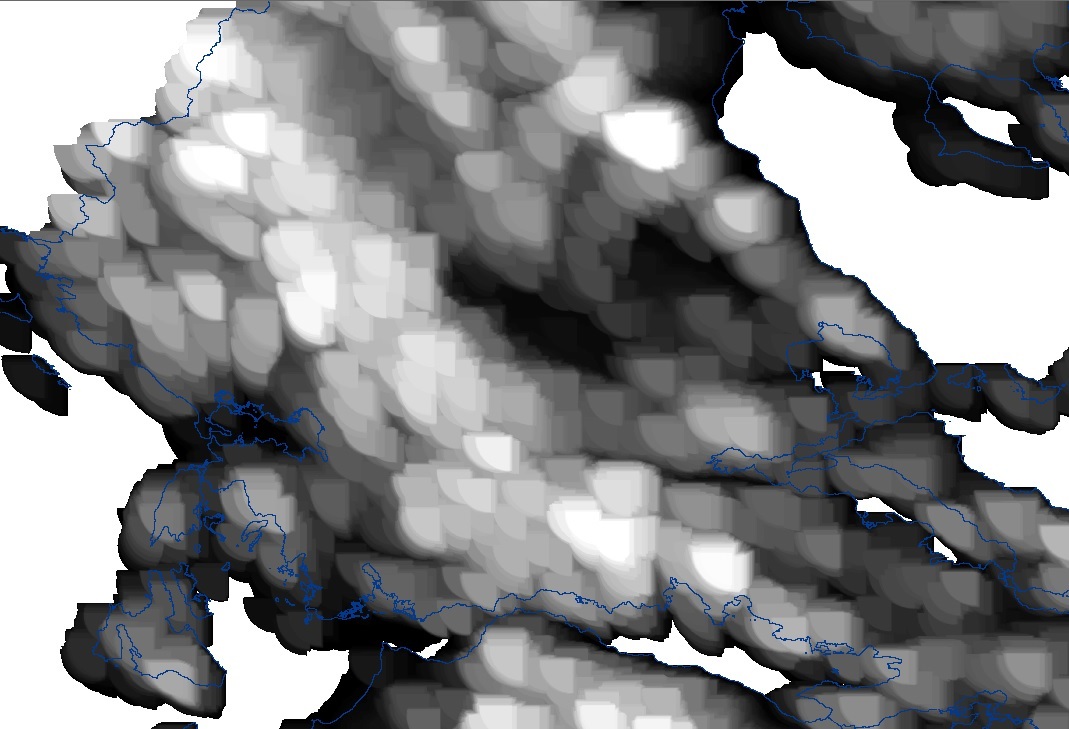 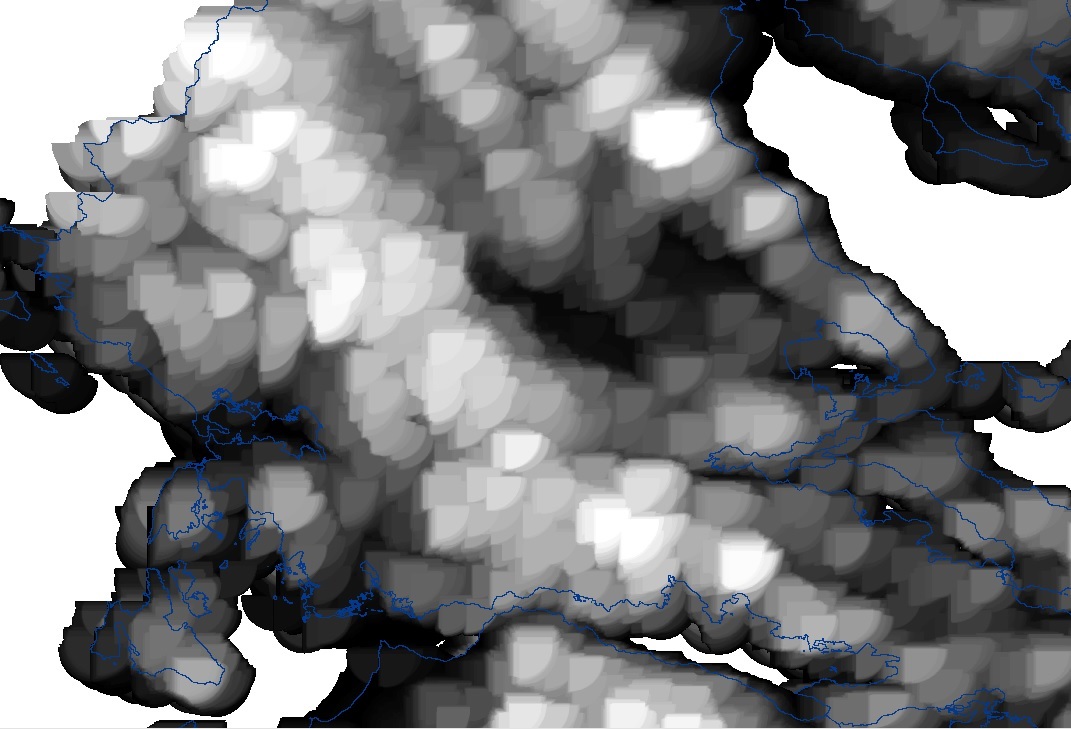 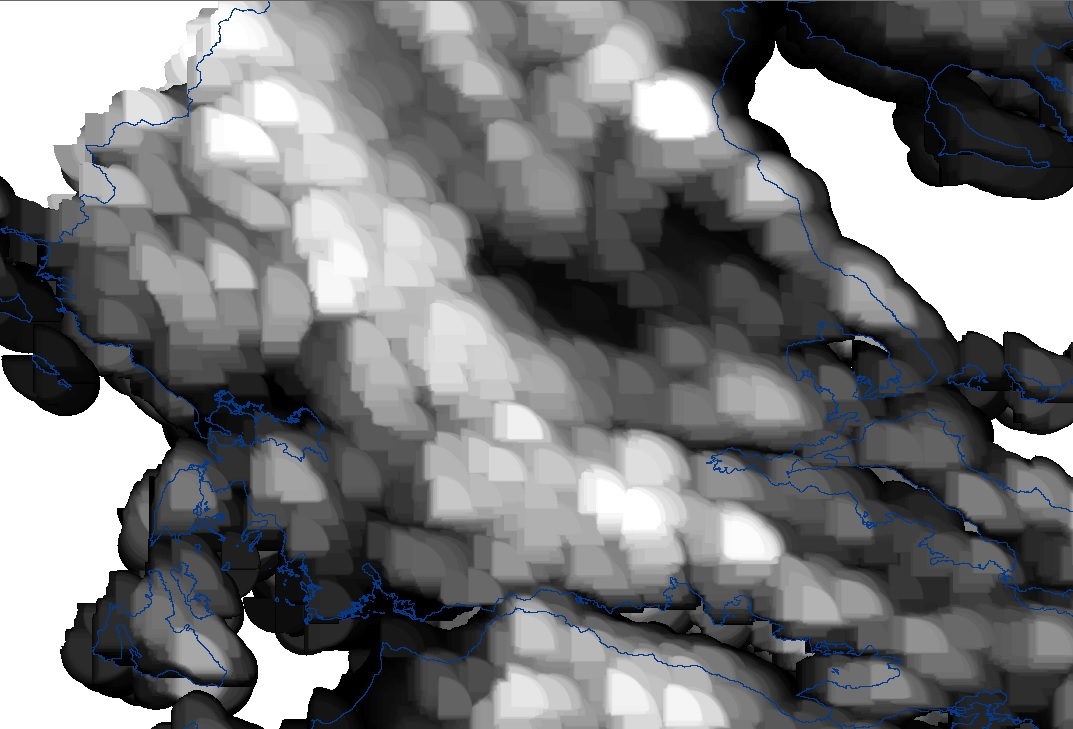 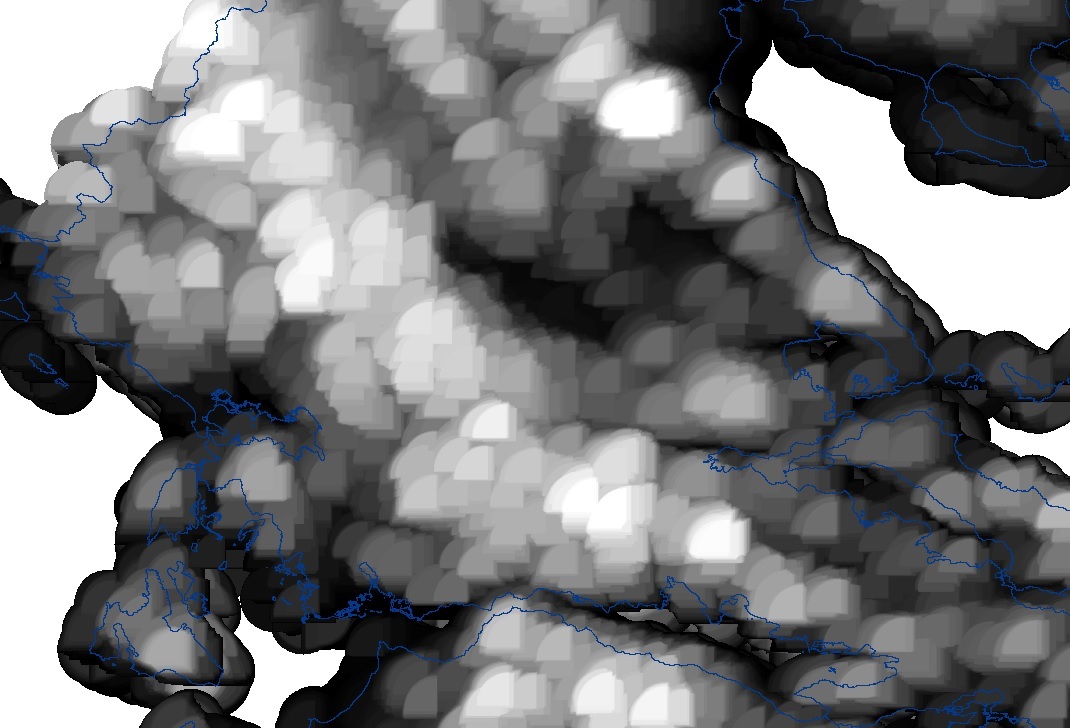 Here is a dataset in which one grid cell has a nonzero value, shown as a blue dot: 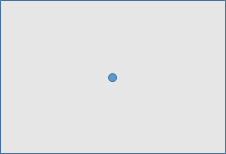 Here is a wedge-shaped neighborhood oriented at 0 degrees north of east, shown in orange:

Its left tip is meant to be centered at each point. It represents a collection of displacements relative to the left tip: it is not yet located anywhere in particular.

Let us consider some points within the map. At each one we will construct a neighborhood of this size and shape, such as at this point x: 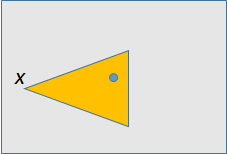 The neighborhood of the next point y does not overlap the blue point. 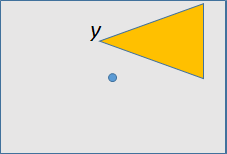 Therefore the value at the blue point does not contribute to the focal statistic at y. 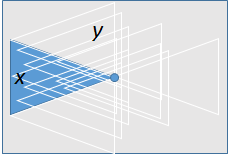 The effect of the blue point has been spread throughout a neighborhood that is the geometric inverse of the original wedge. (In two dimensions it has been rotated by 180 degrees. In three dimensions--when you are doing true 3D analyses--it is rotated and reflected.)

We have merely rediscovered what subtraction means geometrically. If you are still in doubt, here is a rigorous mathematical demonstration of the foregoing. "A" neighborhood is defined to be a set N of displacements (dx,dy). "The" neighborhood of any point (x,y) consists of all points of the form (x,y) + (dx,dy) where (dx,dy) is in N. This particular neighborhood is written N + (x,y).

The inverse of a neighborhood, written -N, is the set of opposite displacements (-dx,-dy) where (dx,dy) is in N.

These two demonstrations--visual/intuitive, mathematical/rigorous--imply the same thing: When a grid contains prominent values that contribute to focal statistics, those values will appear to be propagated within the -N neighborhood of each prominent value. The visual impression is one of a mosaic of -N neighborhoods: all directions appear to have been reversed.

Not the answer you're looking for? Browse other questions tagged arcgis-desktop raster arcgis-10.2 spatial-analyst or ask your own question.