I have created a buffer around several points. I want to intersect this layer with a Census Tract layer. My end goal is to create a table that would list all the census tracts that intersect with the buffer area of each point. Something like this: 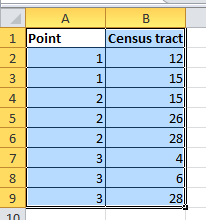 The result must show that some buffer entities may be related to many census tracts, and the other way round. I think ArcGIS' "Relate" function is suited for that purpose, but I don't know how to do this in QGIS.

UPDATE: The way I am planning on doing this if I don't get a simpler answer is to

There has to be a simpler way around, but I don't know it.

I ended up being able to do what I wanted by using the Intersect function between the buffer layer and the CT layer, as @Chris W suggested. The first time I tried running it, the output was empty. I was told that there was a similar bug in ArcGIS where you had to re-export your shapefile if it had been created with a buffer/union/intersect/etc. function. To make it work, I had to re-export the buffer layer into a new one.

Not the answer you're looking for? Browse other questions tagged qgis qgis-2 intersection attribute-joins or ask your own question.

0
Intersection between points and polygons in QGIS
1
Intersecting overlapping polygons individually in ArcGIS Desktop
2
Automating Intersect between two polygon layers
1
How to compute tabulate intersection in QGIS?
1
Assigning object in shapefile to location based on another shapefile?
4
Combining data with partially overlapping polygon layers? (QGIS)