I have the task of creating a map in which the objective would be to help determine a site for a conference. I have the following data:

Addresses of possible conference attendees (I have already geocoded them). 6 possible city sites in the Northeast.

I have the Spatial Analyst extension but not network analyst.

I think a major factor in determining a site would be proximity to the city site and keeping driving time to a minimum for as many people as possible, say less than 3 hours or so or 150 miles).

How can I make a heat map as a general overview of clusters? Answered below I used the kernal density analysis.

How can I figure out the best site based on least driving distance without using network analysis? Answered below.

This may suit your needs:

Depending on the distribution of your points, you could do something relatively simple, such as using the Minimum Bounding Geometry tool to create a bounding box. Ideally you would use a convex hull as an option, but depending on your license that might not be available.

In the following screenshot I have, for example, I used rectangle by area: 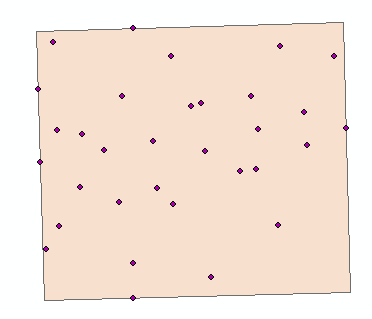 (assuming the point sare the location of the potential attendees)

Now, all you have to do is finding the center of that bounding box.

You could either use the Feature To Point tool to convert the polygon into a point (which would return the center), or you could calculate it using the Field Calculator. Either way you would have your central point, which you can now use to see which city it is closest to.

Of course this method depends on your data. If you have some extreme outliers, or if your points form heavy clusters, the central point that is returned might be nonsensical.

EDIT: To generate the heat map, since you have Spatial Analyst you could use Kernel Density. But attention: since your extent is quite large it might take a very, very long time to run, depending on what pixel size you will choose for the output. So I would recommend saving everythin else before you test this tool ;-)

Not the answer you're looking for? Browse other questions tagged arcgis-desktop cartography spatial-analyst heat-map or ask your own question.