How to find chainage of points using LRS

I have a Shapefile of road that I have converted from a KML file (created on Google Earth) and a txt file containing lat long (from GPS) of points with some attributes. The points are not exactly on the line layer but are very close.

How can I get the chainage of all points from the first point using LRS?

There is an answer given earlier but I have not understood what are the lines route field, points route field and measure field in my layers. I tried to read several notes but to no avail.

Can someone kindly explain? I can send my layer files if needed.

As I explained in Snap points to line and calculate chainage using Open source GIS the QGIS LRS plugin accepts points not lying on the line to calibrate it, so it's not a problem that your points are not on the line. By the way, I assume you already loaded the txt file as a point layer (say gps_layer).

As you may have already read, you first need to calibrate your route. Such calibration enables you to calculate measures on your route.

I will try to explain once more the parameters you need to calibrate your route based on a couple (start and end) of points. You can create such couple of points digitizing the start and end nodes of the route and saving it to a calibration layer which also contains the measures you assign to each point. For instance, start point would have a measure of 0 and your end point would have a measure of 10000 (if your route is 10Km long).

Once you do that, you will use both the route layer and the calibration layer, this way: 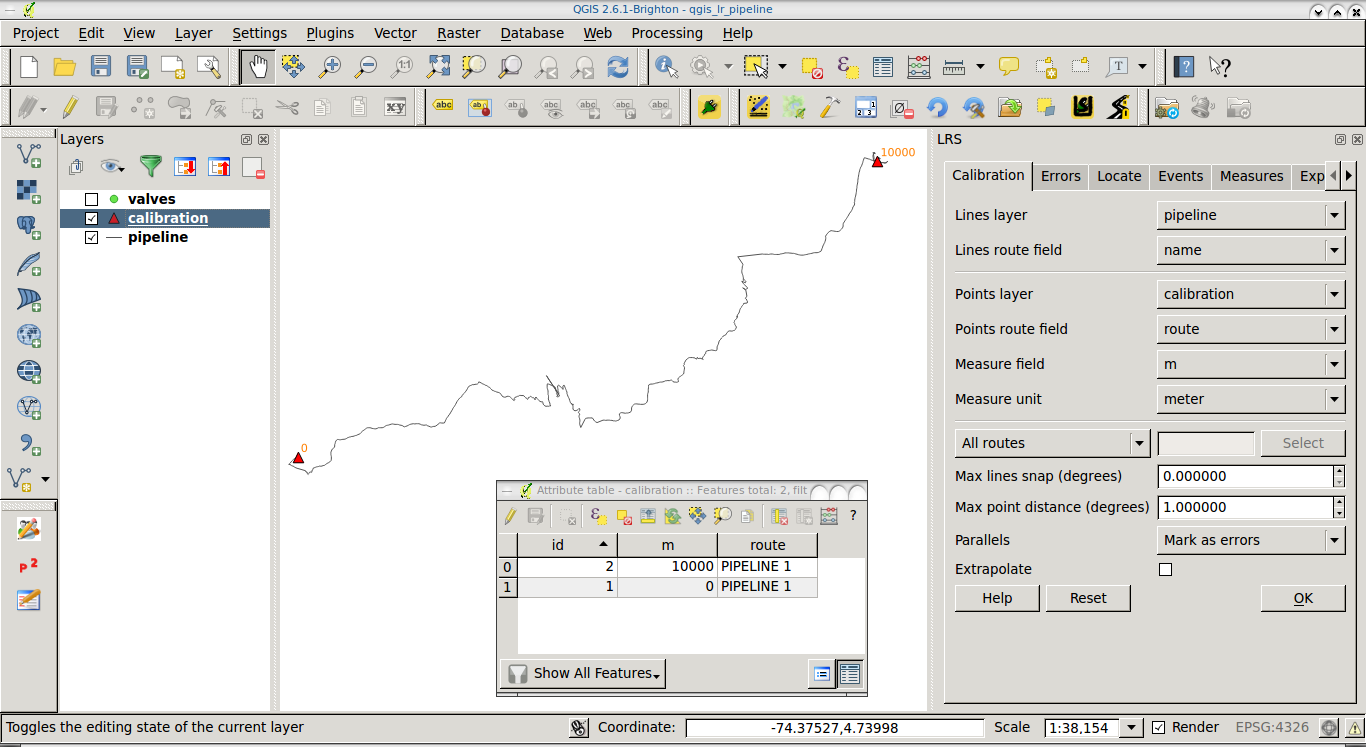 Once your route is calibrated, you can use the Measures tab in the plugin GUI and load your gps_layer, you find how to use such functionality in my answer to How to find Chainage of points using QGIS (Numeral 2.)

I hope it's clear now. If it's not, try to ask something more specific (after a first try from your side).

Not the answer you're looking for? Browse other questions tagged qgis qgis-plugins linear-referencing or ask your own question.

8
Snapping points to line and calculating chainage using Open Source GIS
0
Creating input data for LRS plugin from Excel table without coordinates?
2
How to find measures of points that are close to route in ArcGIS 10.2?
4
Saving a calibrated route in QGIS for "future" use
4
Find order of points along polyline
4
Trying to understand QGIS LRS plugin - How to implement?