How to generate a grid of horizontal equal-area rectangles in a Mercator projection?

I'm new to GIS so pardon my ignorance and bear with me. I'm generating a grid relative to a LonLat point. To make the cells all equal area, I'm creating it in 2163 projection. The problem is that when I reproject to 900913 and stick it on a Google Maps baselayer in OpenLayers, the whole grid is rotated clockwise. I understand this is a purely cosmetic issue, but it's a project requirement. Is it possible to change the map's projection to display it vertically? If not, is there another map source I can use that uses 2163 or can be projected to it?

If all of this is out of a question, is there another way to generate equal area grids for Mercator 900913 which will line up vertically?

Yes. The simplest probably is to use any equal-area cylindrical projection (such as the Lambert equal area) to construct a grid of rectangular cells and reproject that. Because the Mercator also is cylindrical, the rectangle sides will remain parallel to the meridians. To keep the cells all the same area, it will stretch the rectangle heights, approximately in inverse proportion to the cosine of the latitude. 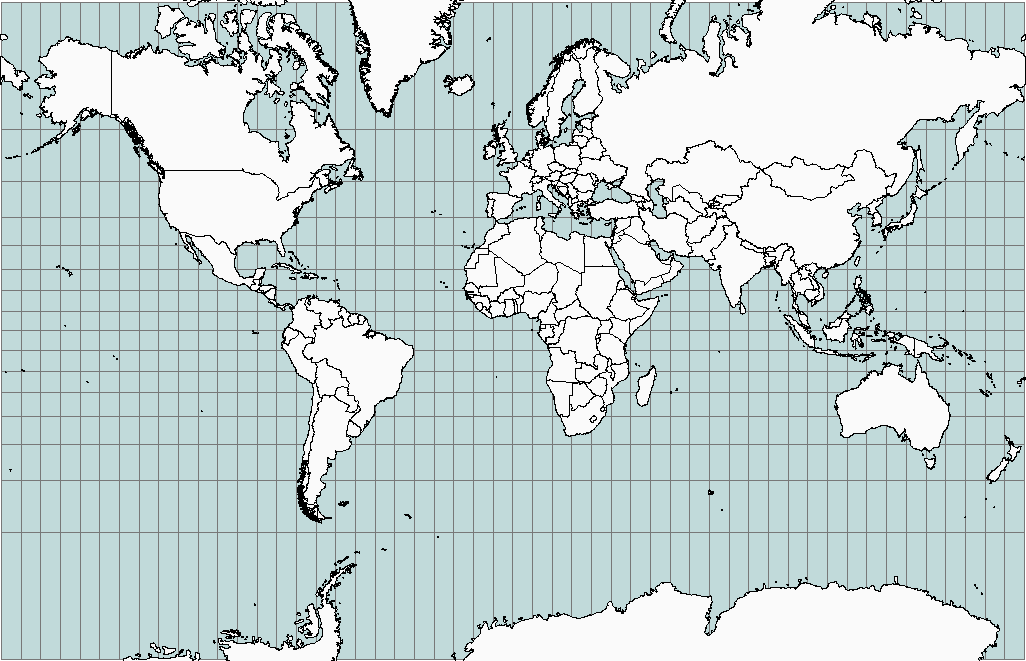 This equal-area grid (covering the oceans) was developed as described here and is shown in a Mercator projection.

(The problem with EPSG 2163 is that it is an azimuthal projection, in which meridians necessarily make varying angles. This not only causes the grid cells to rotate when reprojected to Mercator, but also skews their shapes slightly.)

You probably won't find the Lambert equal area projection in the EPSG directory because it's rarely used for making maps. However, because it tends to be simple to code, it's supported by many GISes. For highest accuracy you would need to make a datum transformation from the Clarke 1866 spheroid to the authalic sphere usually employed by Lambert projections.

Not the answer you're looking for? Browse other questions tagged openlayers-2 coordinate-system google-maps or ask your own question.