I'm trying to make contour/isoline/isochrone maps to show what areas are within walking distance to schools for my pet project to help with the Safe Routes to School program. I followed the pgRouting workshop and underdark's posts (all linked to from my project page) to import OpenStreetMap into a PostGIS database, then used the driving_distance() function to create a point layer that had a cost attribute, then ran the contour plugin of Quantum GIS to create contour lines, which I then styled in QGIS to create this image (pardon the spurious lines, not sure where they came from): 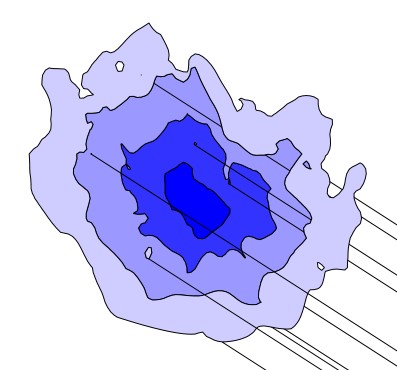 I'd like to replace the QGIS contour plugin and styling feature with GRASS, as I'd like to create this image dynamically for a web service, and I don't think QGIS is meant for that (at least performance-wise, I think it may be possible with Python). So I'm trying to figure out how to do this same thing with GRASS, which appears to be used quite a bit in web services.

From my reading, it appears I'll want to use something like v.surf.rst, though that seems like it would generate more of a heat map with a gradient, rather than the type of image shown above with solid colors for each band (in this case each band is 1/4 mile).

After using v.surf.rst, it's only a question about how to display the resulting cost raster.

GRASS offers r.colors to specify a color map for a raster. As far as I can see, the normal behavior of GRASS is to interpolate colors, so you you'll have to work around this:

Not the answer you're looking for? Browse other questions tagged grass contour or ask your own question.

5
Quickly create contour polygons from cost points using OSS for web app
5
Generating contour lines and filled contours from points
2
Problem with contour lines thickness in bigger zoom levels
1
How can I create polygons for a 3D map from a DEM in grass/qgis
10
Accurately interpolating elevation from contour lines in QGIS?
5
Create contour line from point table in PostGIS
7
Changing blending of contour label to multiply
2
Why is QGIS contour generating tool not working with my DEM tiff file?