I have two point layers. I trust the geometry (read: x and y coordinates) from one of them, but not the attributes data. I trust the attribute data but not the geometry from the other one (the attribute tables have different schema). The basic process (shown in a model builder screenshot below) is to spatially join the point layers, join the result to the points with good data/bad geometry and update their shape field with a script. The script produces one of those damnable "999999: Error executing function" errors.

If I manually step through every stop of the process and feed the update cursor a ready-made feature class it works fine, the points move as intended. It's just when it's set up to run in a model that the script throws the error. I have a feeling that I may be passing the parameter incorrectly, but I can't say for sure.

I've tried moving the "fc = GetParameterAsText()" line around (including in the update cursor parameters) to no avail.

I will also point that I shamelessly took the python from a post on Geonet, located here. 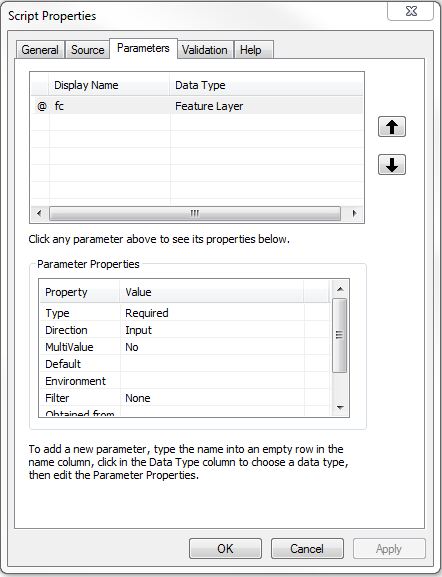 It lools like the problem is that pnt has no spatial reference and arc is having a spit, It's that or your field isn't being retrieved correctly, it's best to use row.getValue(field_name) rather than row.field_name as getValue is more flexible. Please ensure the fields X_Coord and Y_Coord exist in your layer (and aren't turned off) in the layer dialog.

This would definitely work better as an arcpy.da cursor (ArcGIS 10.1+):

Not the answer you're looking for? Browse other questions tagged arcgis-desktop arcpy modelbuilder cursor error-999999 or ask your own question.

4
Pass a variable from Modelbuilder into a Python script