Is it possible to iterate through the point features in one shapefile, add the individual point as the "Origin" to an OD Cost Matrix (which already has the "Destination" locations added), solve for the Matrix, and export the lines or the line table, then move on the the next point and do the same? Or is there perhaps a simpler way to do this?

I know I will end up with a ton of tables, but I am hoping to run some analysis the individual tables.

Here is a graphic model from ModelBuilder I was working on: 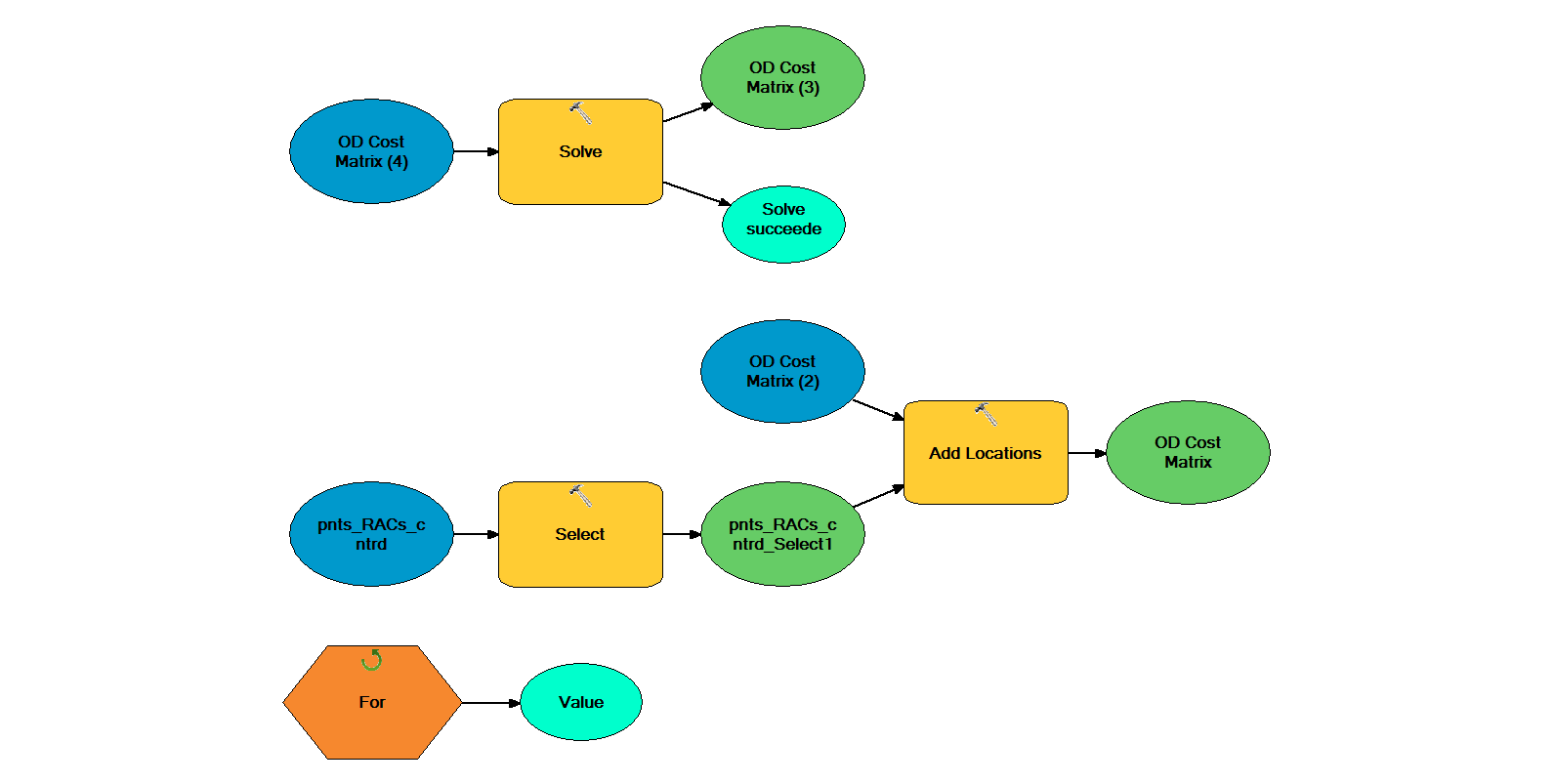 Yes, there are two possible approaches to use.

One is to use the OD Cost Matrix tool and simply split up the resulting table. You'd select all records with the same origin point and export them to a new table. There is at least one Split by Attributes custom tool for ArcGIS out there (referenced here but the 10.x link there is currently broken) that can do this for shapefile/feature class, however I'm not sure if it would work with just tables (ie no geometry). Of course, you can generate straight lines with OD Cost Matrix and that might be a workaround. There might also be limits if trying to do this to a shapefile output depending on number of matches for each origin. This is likely to be the faster of the two approaches in terms of processing. I found another such tool (I think it's different) here: http://www.umesc.usgs.gov/management/dss/split_by_attribute_tool.html

The second approach is to build your model to iterate through origin points, but rather than using OD Cost Matrix you'd use Closest Facility. Since there's only one facility (selected origin), you'll get the distances and route line to all destinations. However this would be considerably more processing intensive than OD Cost Matrix - see the Tip on the OD help page or the CF help page. Note that an iterator executes the entire model with each iteration - you may need to create a submodel to hold part of the process.

Not the answer you're looking for? Browse other questions tagged arcgis-desktop arcgis-10.0 network-analyst distance-matrix or ask your own question.

2
Merging OD Cost Distance Matrix result from ArcGIS Network Analyst in ArcPy?
1
Obtaining road distances between each pair of points in point feature class using ArcGIS for Desktop?
1
Can you create a square OD Cost Matrix with Network Analyst?
2
Is there a way to delete OD Cost Matrix locations with arcpy?
1
OD Cost Matrix does not work from every origin to every destination?
1
Finding routes instead of straight line in Network Analyst O/D cost matrix?
1
Exporting Origin-Destination Matrix Table into Separate Origin and Destination Columns