I am trying to calculate the legal subdivision center of a DLS location and even when I try the simplest calculation my numbers are always off from other calculators.

Take for example DLS location 1-1-1-1 W2. From what I understand being adjacent to the 102W meridian and adjacent to 49N as well it should be relatively easy to calculate This is also simple since I do not believe road allowances come into effect on this section as they begin on the top and left sides only AFAIK, and this section and LSD is the very bottom right side of the grid.

That said, even when I dumb down the calculations to go straight to the LSD level my numbers are off. An LSD is known to be 1/4 mile, and being in the bottom right section and bottom right legal division grid, it should be 1/4 mi west and 1/4 north north for the top left boundary from 49N/102W.

I used the rhumb line calculator here (http://www.movable-type.co.uk/scripts/latlong.html) to calculate .25 miles west (bearing 270), then .25 miles north (bearing 0) to get the the top left point of the polygon square.

So I must be missing something here because I cannot see how everyone else gets a number the same but not my calculation. Does anyone know what I am missing here?

As far as the math is concerned, you were on the right track, although using an ellipsoidal model would yield better results.

However, using a purely mathematical approach to calculate coordinates of Dominion Land Survey subdivisions will not give the correct results anyway, even if you calculate everything right. Differences up to several hundred meters can arise. Here's why.

The original survey was made in the 19th century, so with 19th century technology, and geographic coordinates and distances were not determined with the same method, nor the same accuracy as they are today. However, the physical survey prevails over any "theoretically intended" coordinates of the subdivisions, so the subdivisions remained at the physical location that had been determined back then. This means that it is not possible to accurately calculate true DLS subdivision corners or centroids relying solely on theoretical coordinates and geographic distance calculations, even if you correctly take into account road allowances, start at baselines, use an ellipsoidal earth model, etc. Your computed coordinate may be off reality by hundreds of meters.

LSD calculators do not rely on such a mathematical computation, but rather on datasets containing the actual coordinates of the physical subdivisions, remeasured with modern tools and expressed in modern datums like NAD83 or WGS84. This results in coordinates that can be quite different from the theoretical ones that you intended to calculate, however they do represent the true location of the land (at least within the reported accuracy of the datasets).

Here is a visual example of this discrepancy, using the southeast corner of subdivision 1-1-1-1 W2: 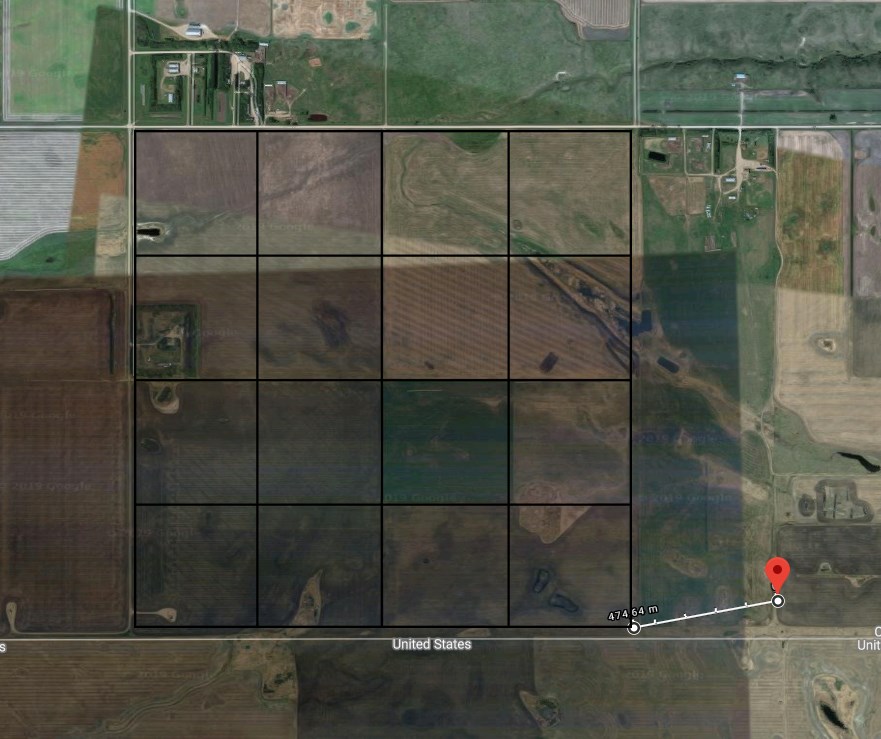 The red marker is located at 49°N, 102°W (WGS84). However, we notice that the actual physical corner is over 400 meters off the theoretical coordinate in a modern datum like WGS84 or NAD83. Hence, a simple mathematical calculation of corners will be off even at the base point, because that's not where the land was measured to be by the surveyors in the 19th century.

Not the answer you're looking for? Browse other questions tagged coordinates or ask your own question.