I am trying to make a custom made Python Script tool which I would like to use in Model builder. I am using the arcpy.Calulate_field_management function (simple reclass function as an example), but it seems not be working properly. Please note that when I run this script on its own through a Python editor (IDLE), the script works fine. After adjusting it to make it work for a custom Python Script tool, the script stops when it is going to calculate the field.

This is the script which I use for my tool with a comment where it stops. The arcpy.GetParameterAsText(0) refers to the table which you can find in the picture below.

Here is a picture of the table which I am trying to edit together with the customized script tool window when it is finished running. I have added customized messages in my script to find out where the script stops running. 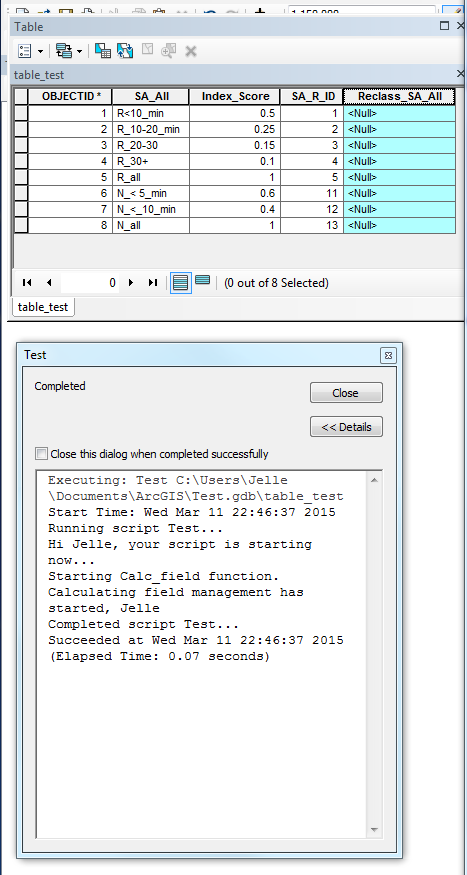 I have the feeling I am doing a basic error which stops the scripts from running the calculate_field_management within my tool. Does anybody know what I am doing wrong? AM i right if I say the calculate_field_management cannot refer to another function within my expression? This does work when I run the script on its own through a Python editor (IDLE).

In my opinion, the best way to calculate a field using complex logic when you're already using Python is to do it with an UpdateCursor instead of the Calculate Field tool. (As @FaridCher's answer shows, you end up defining a Python function in a string, which makes it difficult to read, as well as to write.)

In your code, I would replace

Note: this method uses the UpdateCursor from arcpy's "Data Access" (da) module. If you have ArcGIS 10.0 or earlier, you will have to use the regular cursors.

Rather than using if-elif statements, just reclassify using a one-liner expression with a dict:

which you can put the CalculateField_management function:

Not the answer you're looking for? Browse other questions tagged arcgis-desktop python field-calculator python-toolbox or ask your own question.