I have this hunch that I could travel no more than 50 miles from the most remote spot in the Eastern United States (east of the Mississippi River), in the direction of the nearest road, and find a road.

Definitions:
Most Remote: Spot furthest from a road.
Road: Google Maps definition of a road.

How could I prove or disprove this claim (i.e where is the most remote spot in the Eastern US)?

A fast and informative way is to create a distance grid based on the roads. This is usually done in a projected coordinate system, which necessarily introduces some error, but by choosing a good coordinate system the error will not be too great (and can be corrected).

The following example defines a "road" as a US Interstate or US or state highway of comparable magnitude. These roads are shown as red polylines. It uses a Lambert Conformal Conic projection. Although its metric distortion can readily be corrected in terms of latitude, that's not really necessary in this example because the distortion is less than 0.6% except in Florida, where it grows to 2.3%: good enough for this illustration. 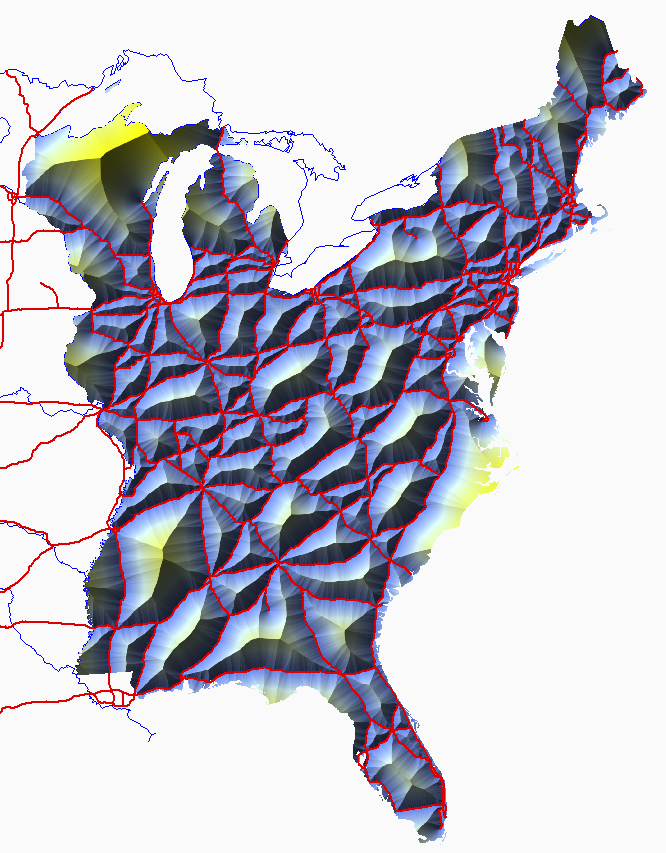 The distances are color coded from dark cyan (short) through yellow (long) and hillshaded to emphasize the local maxima. A glance shows the greatest distances are attained in central Wisconsin and the North Carolina coast. The GIS tells me the maximum distances attained are 194 km and 180 km, respectively. (The maximum attained in Michigan is 120 km, less even than the maximum in central Mississippi, 137 km.)

Using any raster GIS (such as ArcGIS, GRASS, Manifold, etc.) one can perform a similar computation using any roads layer desired (such as Census TIGER streets features). Straightforward post-processing will find all local maxima of the distance grid (seen as peaks on this map), thereby identifying all points that locally are as far from a road as you can get. Very simple post-processing will identify all points exceeding a distance threshold such as 50 miles (about 80 km).

A variant uses a "costdistance" calculation, instead of Euclidean distance (as a proxy for spherical distance), to determine points that are (say) a maximum travel time from the nearest road. This is not an onerous task: typical computation times are a few seconds (at most) at the 1 km resolution used here.

How could I prove or disprove this claim?

Take the road network (TIGER data?) and buffer it with 50 mile radius. You'll see if any land masses are not within the buffer zones.

Where is the most remote spot in Eastern US (spot furthest from a road?)

Iteratively increase the buffer radius until you've narrowed it down.

It is certainly not topology. I would suggest geography.

To prove the claim, I would create a map of the area of interest, then color each point within 50 miles of a road. After your favorite list of roads, see if there are any uncolored points. Then go to Google maps, for example, and look if there is a road you missed. Of course, a "road" is not well defined, so the result will depend on what you consider a road.

For question 2, (assuming the result of 1 was that you proved the claim), try the same process using 40 miles and see if there are points that far away.

Not the answer you're looking for? Browse other questions tagged distance spherical-geometry or ask your own question.

5
Finding point in country furthest from boundary?
6
percent of total population is x distance from nearest point (ArcGIS 10.2)
4
Calculating the maximum remoteness from of the boundary of a polygon (i.e. the radius of the largest circle inscribed in this polygon)
0
Determining average distance from points to line using ArcGIS Desktop?
1
Finding distance to closest road (polygon to line) in ArcGIS for Desktop?