Is this distribution of GPS positions caused by multipath distortion?

I have some GPS points that are close to where they should be, but not nearly close enough (horizontal precision is around 10 meters). Looking at the positions which comprise these points (there are 10-15 positions per point), the positions are in a nearly straight line. Normally, I would expect to see a more or less round grouping of positions with the point somewhere in the middle, which I do see for most points in this dataset.

The points were collected on a 10-20 foot wide road through a forest, with handheld Trimble units (the antenna was in the handheld, not on a pole), and I was told that in most cases the points were taken by someone who had their back against a tree. The area is in the middle of a bayou, there are no nearby overhead obstructions or buildings nearby, overhead or otherwise. I've also differentially corrected the locations with base data from a nearby CORS base station.

One obvious explanation is that the person was actually walking and not standing still when taking these points, but I've been told that wasn't the case. My only other guess as to what's causing this pattern of positions is multipath distortion. I don't think these trees are big or dense enough for that, and the fact that the positions are in a nearly straight line seems too convenient.

So does this look like multipath distortion, or something else? The red point in this screenshot is the worst of the bunch, but there are others with the same problem. In this spot, I would have expected the red point to be pretty close to the southernmost (bottom-most in this screenshot) GPS position (the small black dots). As you can see, points 740, 736, and 737 have pretty tight clusters of positions, the blue points are ones with much higher precision. 738 and to a lesser extent 739 have a bit of the straight line problem but not as bad as the red point. 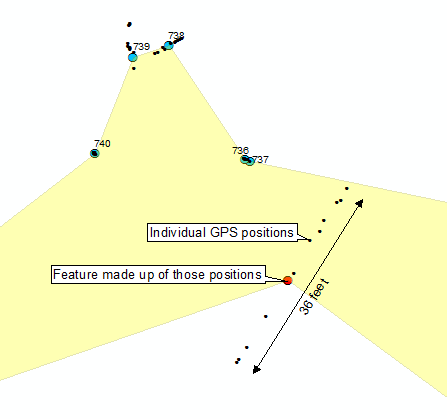 Standing under a tree in any case will cause issues with GPS observations. Regarding error mitigation, were these multiple points taken to account for this. If so, may I suggest a second visit (I'm sure this may not be possible/desirable) for independent observations?

Unless the observation are post processed when presented above, another good redundancy while in the field would be to monitor point position on the device interface.

I also notice a similar pattern at point 738, if the environment is similar at these point and not others there may be something that could help you refine what might have caused these results.

This looks like bad multipath effects I have seen - but those are generally seen when capturing features near (within 2 foot of) high reinforced concrete walls. Different environment but the effects look quite suspiciously similar.

External antennas are supposed to have better multipath rejection. And you might do better using an offset (preferably distance / distance) from the middle of the road, although that's more time-consuming.

This does look like multipath distortion. We could speculate that it is aggravated by having one's back to a tree which would have the effect of blocking/attenuating the direct path signal. It may also be that the tree shading effectively blocked just a portion of the sky view thus giving a bad geometry effect.

You may be able to go back and re-process the positions either using a higher minimum elevation threshold, to eliminate low-horizon satellites, or by excluding any particular satellite that seems to have consistently large residuals.

Not the answer you're looking for? Browse other questions tagged gps accuracy trimble precision or ask your own question.

7
How to improve positioning of images taken with GPS and Gyro info?
5
Calculating “travelled distance” of a GPS track without including “stops”
4
Is there a correlation between the absolute errors of nearby GPS receivers?
5
Odd, old coordinate formatting from 1997 GPS
0
Filtering GPS data for precise positioning?
1
“Average” GPS distances between TrackPoints?
3
How precise is GPS?