I'm writing an Arcpy program to process data in a layer of several hundred points ('ptsLyr', from file 'ptsFile'), each of which has its own ID ('RecordID') and an associated value, 'radius', that I want to use to create a distance buffer around that point as a proxy for a trade area; at the location of the point, the value of the raster will be 1, while at the edge of the radius and beyond it will be 0, with a linear decrease from center to edge. Ultimately, I want to sum all of the individual buffers to get a distance-weighted measure of how many points contribute to each cell in the raster. Because of the number of points I don't want to create hundreds of individual raster files.

I have to iterate through the points individually because the distance function EucDistance() calculates the distance from each cell to the closest point, which is not what I want. Also, I apparently have to create a new layer from each point as I process it because EucDistance() doesn't seem to respect selections of individual points made by SelectLayerByAttribute_management(). EucDistance() will set values outside the radius to 'No Data' but I can easily enough reclassify those to zero once I have the final, summed raster.

The map coordinates are projected (NAD83 UTM Zone 17N) and all values are in metres.

At the moment I have the basics working but am getting errors associated with either: the raster layers/raster math. I suspect the problems have something to do with my environment settings, raster objects vs layers, files vs geodatabases, and/or the (im)mutability of rasters.

If I do the raster math in the format 'dist1 = radius - distR', as above, I get the error

On the other hand, if I explicitly designate raster objects using the format

then I get the result

Can anybody explain what the problem is and, most importantly, help me complete this code so it works properly?

Following up on Luke's suggestion, at this point I've now tried it with none of the files in a gdb, only the temporary files and the output raster in one, or all of the files in one (no spaces in the path/filenames). All files are in the same projection with the same extents. I've also tried it with 'Add results of geoprocessing operations to the display' both on and off.

I actually had it working the other night, but it crashed during operation and I must have changed something either in the program itself or in my ArcGIS configuration somewhere. This is more or less what the output is supposed to look like: 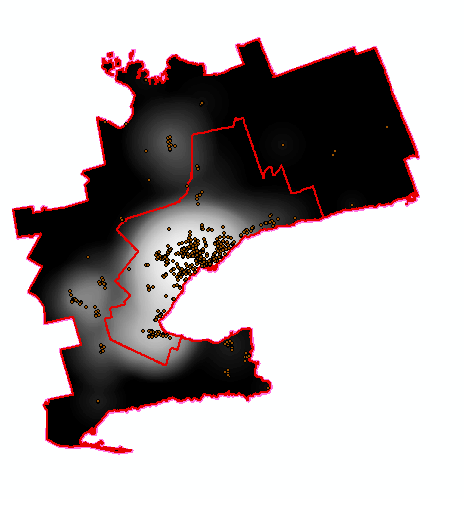 Now, however, whenever I enter the 'else' part of the 'if' statement (modified as below):

the sumRas raster gets replaced with no data, which obviously prevents me from accumulating a sum. I have no idea why this is happening and why I can't fix it.

You could try setting the output workspace with arcpy.env.workspace to be a folder not a file GDB.

Not the answer you're looking for? Browse other questions tagged arcpy raster buffer error-000732 error-010240 or ask your own question.

2
How to set a minimum point snap distance?
4
QGIS distance from a cell center to the nearest point
3
Iterating through every raster cell and calculating distance to other cells using Python?
1
Create point clusters based on grid
0
What tool for Sum/Average/Count within x distance of each raster cell using ArcGIS Pro?