Misalignment of EPSG:4326 and EPSG:3399 coordinates

I'm having a QGIS project in local coordinates (Gauss-Kruger, EPSG:3399) with some layers in the same reference system. On top of that, I want to display point coordinates, which I digitized using google maps, so I assume them to be in Pseudo-Mercator/ WGS84 (EPSG:3857).

Now, when I add the point coordinates, they won't show up in the map. If I change their reference to EPSG:4326, they are displayed, but they have a mismatch of more than 150 meters.

In addition, I loaded a WMS layer, in WGS84 (EPSG:4326) which fits fine with the point coordinates but also does not align with the other layers from the project.

I included a partial view of the project, where you can see the misalignment. The overlay shows a river obtained from a DTM (in local coordinates) in blue. The displacement with the river in the orthoimage is clearly visible. The green points are the ditigized ones, as said above.

Any ideas how to handle this? 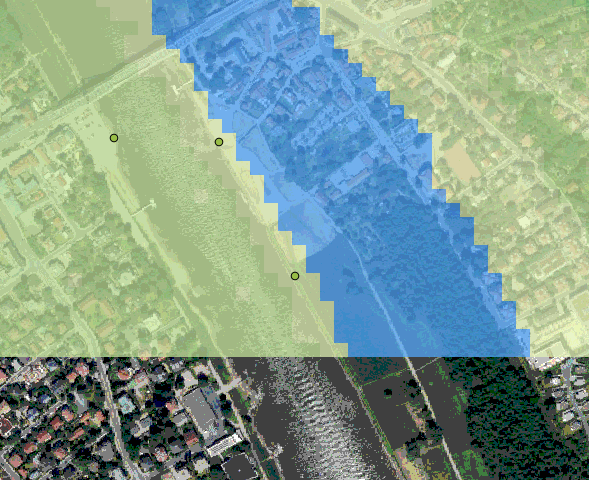 In QGIS, the projection string for EPSG:3399 is:

This projection string has no datum shift +towgs84, which I would expect for every transformation from the German DHDN/bessel to the WGS ellipsoid. See this page in German for more information on official transformation parameters: http://www.landesvermessung.sachsen.de/inhalt/etrs/method/method.html

Not the answer you're looking for? Browse other questions tagged qgis georeferencing coordinate-system epsg or ask your own question.

10
How can I convert geomagnetic coordinates to geographic coordinates without doing the math myself?
3
MMQGIS:Create:Hub Distance: Output shapefile in wrong coordinate system
3
How can I use GK + ETRS89 projected data in QGIS or Proj?
2
Gauss Kruger to WGS84
6
Print Composer Reference map
0
Projecting coordinates into different EPSGs gives inconsistencies
0
Buffering like set to lat/lon degrees but layer is set to UTM reprojection - EPSG: 32611