I have routing working where a user clicks 2 points on the map, I find the closest vertex to those 2 clicked locations and pass that to a pgr_dijkstra function.

What I would like is give the edge a user clicks a dynamically lower cost, which would force the route to go that way, even if there is another route that is the same cost, or maybe even less.

So given this image, a user clicks A & B, the route could go either way, as the length/cost is the same. But since the user clicked the "B" on the left edge, that should be given priority. 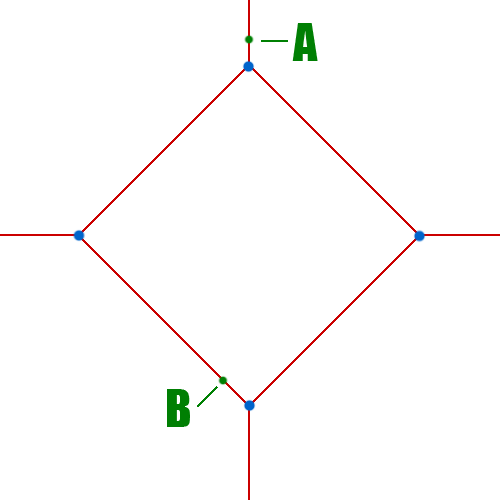 This is my query now:

You could do the following:

I thought it would be nice to have such a functionality in pgRouting, but it's not as easy to add as it looks like and it increases the amount of functions to maintain. There are two other issues:

Of course contributions are welcome, if someone has a generic solution or can fund the development.

Not the answer you're looking for? Browse other questions tagged postgis postgresql pgrouting or ask your own question.