Based on this article "PDF: Extensions to least-cost path algorithms for roadway planning (Chaoqing, Jay, dan Mandy 2002)" (Click on link for PDF).

If so, why in determining the cost surface, the slope of the data used is the result of the 3D slope analysis?

Whereas based "ArcGIS Help sources" equation used is as shown below:

Whereas the anisotropic equation-accumulated surface, the formula used is the Euclidean Distance formula.

If anyone can explain what alogarithm used for the analysis of least cost path in ArcGIS softwere?

In this case, I want to find the shortest path between two points through the terrain surface. Technical criteria that must be fulfilled is, "the slope should be less than 5%" when I compare with other software by hand through contour lines such as AutoCAD, Surpac. the results are very different. see the picture below 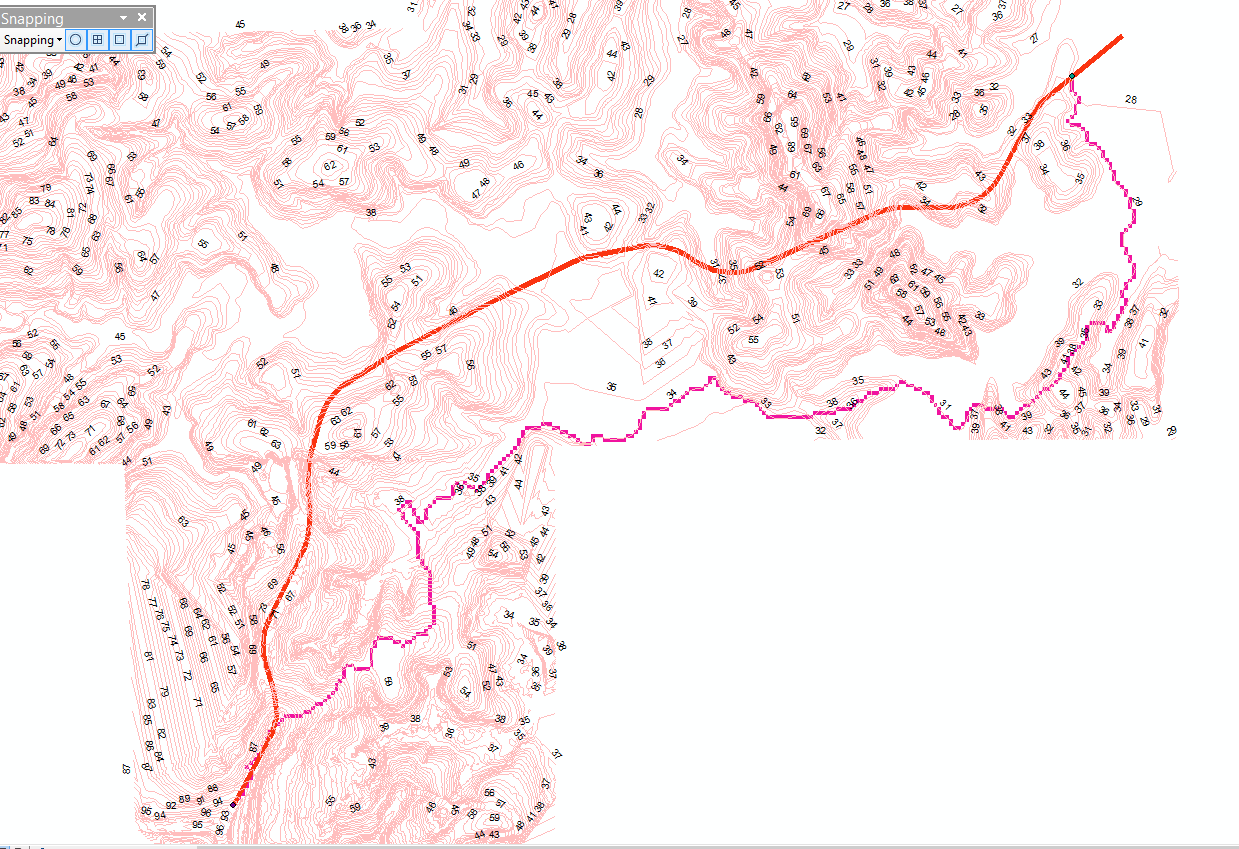 One thing that should be mentioned, is that the Least-Cost-Path is computed as, literally, the least cost path, and not as th Shortest Path. Also cited from ArcHelp for Cost Distance Analysis:

Thus, the output you have recieved chose a path which follow the rule of the lowest cumulative slope. Yet, it is longer than the other path you have obtained (red one).

To compute Euclidean Distane in arcmap, you may want to use the Euclidean Distance Tool; that is to say that arcmap do provide an algorithm to compute anisotropic distance (cost surface). Yet it ignores other obstacles, such as: cliffs, rivers, or from other costs such as: slopes.

Than, you should use the path distance which is similar to the cost distance tool, i.e. taking slopes as costs; but also consider euclidean distance as a factor while generating a cost surface and calculating a least-cost (this time, also shortest) path. As in:

The path distance tools are similar to the cost distance tools in that both determine the minimum accumulative travel cost from a source to each cell location on a raster. However, path distance not only calculates the accumulative cost over a cost surface, it does so while compensating for the actual surface distance that must be traveled and for the horizontal and vertical factors influencing the total cost of moving from one location to another. The accumulated cost surface produced by these tools can be used in dispersion modeling, flow movement, and least-cost path analysis.

Regarding the slope constraint: you can assign NoData (set Null in field caluclator) for each cell with a slope >= 5%. That will prevent a path from being generated through those cells.

Not the answer you're looking for? Browse other questions tagged arcgis-desktop spatial-analyst cost-path or ask your own question.