Are any fictional worlds available in some GIS format?

Is there any fictional world (e.g. Middle-earth, Discworld etc.) which could be used in a GIS context?

For example, an MBTiles archive and a shapefile or any other format usable with OpenLayers / Polymaps / Leaflet?

Reset to default
10
Want to improve this post? Provide detailed answers to this question, including citations and an explanation of why your answer is correct. Answers without enough detail may be edited or deleted.

For middle-earth there is a community doing this kind of stuff: http://www.me-dem.org/

(update) The link is no longer active but you may find more at: https://forum.outerra.com/index.php?topic=2344.0

This is not quite a fictional world, but a nice use of GIS technology nonetheless.

There's a fabulous XKCD comic featuring a highly detailed illustration, which is a bit tiresome to click and drag in the tiny window provided.

Florian Wesch georeferenced the whole cartoon and has provided it in a Leaflet map at http://xkcd-map.rent-a-geek.de 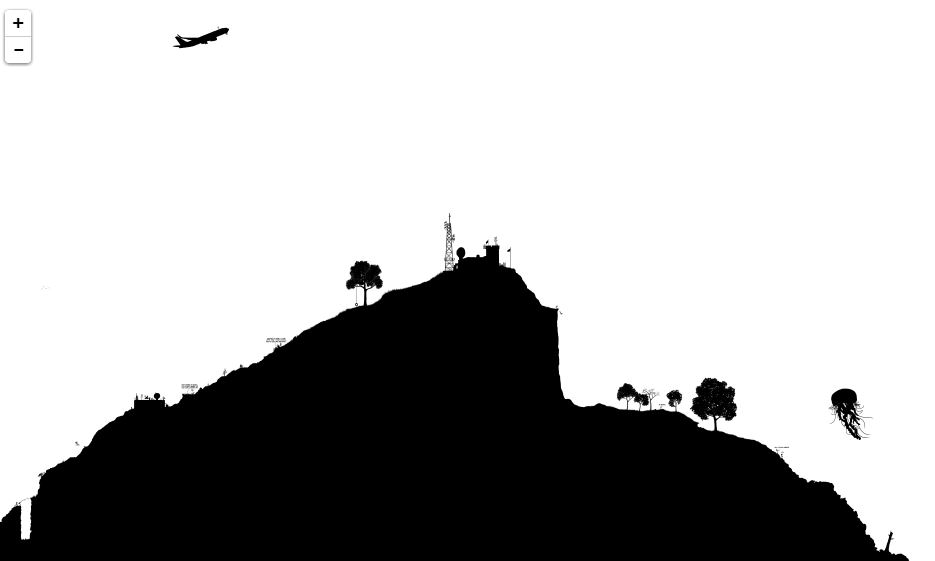 There is an interactive Google Maps of Middle Earth. Talked about in this article http://geoawesomeness.com/middle-earth-digital-elevation-model-mapping-lord-rings/

Then here's the interactive map http://middle-earth.thehobbit.com/map

Just open the downloaded otx file, it will be installed automatically by Anteworld.

At the login screen, select the Middle-Earth (medem) world from the menu above the login button. It's that easy.

You can look at OpenGeoFiction, they use OpenStreetMap tools to make fictional maps.

Any image is also possible. You just need to use image overlay component with a raw image or tiled images with Zoomify. Instead of projection unit, you simply use pixels.

Leaflet, OpenLayers 2 & 3 support all this cases in native (except Leaflet that need a plugin for Zoomify)

Im not sure I understand your question. But it made me think of this fictitious islands and time periods (well maybe not so fictitious time periods) metal map created by Patrick Galbraith
also there are several of those types of maps in this question as answers.
If it is data you are wanting you might explain the use (after you get it into openlayers). There is a dataset put out by safe software called interopolis with the data strewn throughout the website on different training links.

Safe software has done some work with minecraft (James Fee) and many of the 3d datatypes.
Recently discussed at the user conference was the fact that Mojang had an initiative called block by block. encouraging young planners to redesign their communities to show what they would like to see it look like. It doesn't look to me they were very encouraged.

I doubt the data is readily available but since you specifically mention Discworld, there is an iOS app for the map of Ankh-Morpork which would have in in-game coordinate system and could thus be projected.

The Disc would be particularly difficult to map as you would have to write an entire spatial reference specifically for it that instead of a spheroid used a cylinder. Unless you want to consider the Disc as pancake shaped in which case converting the math so its just a smashed sphere might be easier (with The Hub being a feature on the surface not part of it, that math would be horrible). All coordinates would be polar. Most fantasy doesn't get into the details of the physical geodesy of world(s) involved so projection is not easy. Sci-fi would be more likely to be a genre with that sort of data but I don't know of anyone creating datasets for any works. I would gladly help with a Discworld project though.

You could follow up the steampunk world described in How do I specify a CRS for a fictional game map in QGIS?.

I'm not sure whatever happened to it, but it'd be interesting to see how the chap got on.

3
Still no fictional geographies in some GIS format?
184
Seeking examples of beautiful maps?
7
How do I specify a CRS for a fictional game map in QGIS?

55
The GIS of War - Tracking Conflicts and Their Effects
22
Near real-time sources of lightning strike data
6
GIS storage format for better performance - Android device
2
Where can I find GIS Data for Environmental Constraints for Hawaii?
1
Superimposing high resolution NetCDF data on Google Earth?
1
Is there any shapefile (or other format) of Russia's time zones after 2014 changes?
2
Searching for UN regions/sub-regions shapefile
0
Are there any web services that return an elevation raster given a bounding box?
0
Looking for world maritime boundaries in Geojson