I am trying to use the "Select layer by location" tool, in Model Builder, ArcGis. This tools has 2 input files: "Input Feature Layer" and "Selecting Features".
I cannot connect the "Input Feature Layer".
When I drag and drop the "Connect" arrow (which is used to link layers to tools), The tool only shows "Selecting Features" (Fig. 1). Ok... I have tried to open the tool, and choose from there, the "Input Feature Layer", but it creates a duplicate of that layer (Fig. 2). By creating a duplicate, all the steps of this model stop at this particular step.
What can be causing this error? I work in ArcGis 10.2.2 and use no extensions. 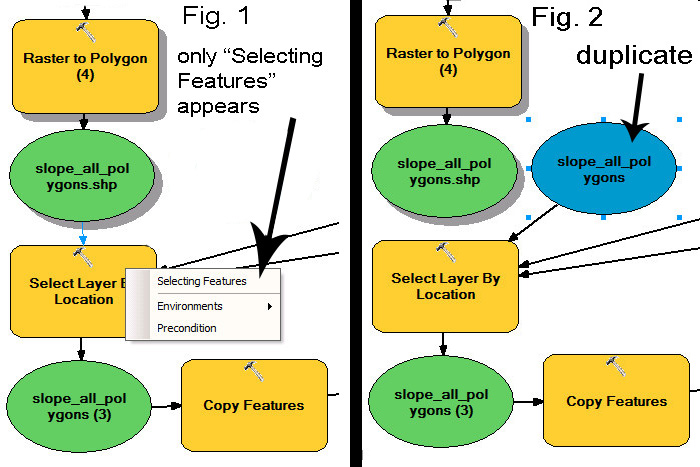 The problem is that the dataset you are currently trying to use as the input feature layer is technically not a feature layer, it's a shapefile. What you need to do is use the Make Feature Layer tool on the shapefile, and then use the resulting feature layer for the selection process.

It's a little confusing, but realize that when you add a shapefile into ArcMap, what you see in the table of contents is actually a feature layer made from the shapefile (the shapefile is just the data source). So you are very used to dealing with feature layers, you just don't know it.

It's interesting that, as you observed, while you can't use the shapefile as the input features, you can use it as the selecting features. Looking at the documentation for that tool, it seems like only a feature layer would work as an input for that parameter, but apparently that's not the case.

Not the answer you're looking for? Browse other questions tagged arcgis-desktop modelbuilder select or ask your own question.