Encoding error between maptools and ArcGIS

I am having a trouble of encoding at writing shapefile by maptools (0.8-34) of R by MacOSX and reading that by ArcMap 10.2.1 in Windows 8.1 through parallels desktop. Using an original shapefile, I wrote an edited file by writeLinesShape as follows:

After this, I try to read "edit.shp" with ArcMap but cannot read Japanese strings properly in "dbf" file, which I could read in the original file. (Of course I did some edit before writing "edit.shp" but I have the trouble even in this simplest code.)

The original shapefile seems utf-8 because

worked in R. Also, I tried the following suspecting that ArcGIS can read shift_jis or cp932,

before writing the file, but Japanese strings were not shown properly in ArcMAP again.

Is there any way to solve this problem? I suspect that maptools is not writing utf-8 file because ArcMap is able to read utf-8.

I have been able to replicate your problem using the provided shapefile (original).

I've opened original.shp in R using both maptools and rgdal and have successfully plotted it. I've also been able to open this unedited file in QGIS 2.8 and ArcMap 10.1. In all cases the Japanese characters in the attribute table displayed correctly.

However, when I edited the shapefile using edit <- writeLinesShape(original, "edit.shp") with maptools I received the following error message when trying to load the edited file in to ArcMap 10: 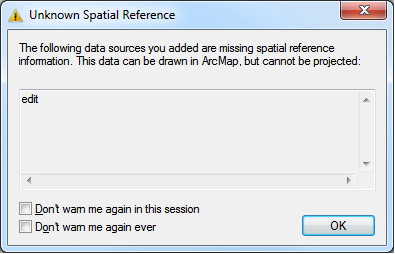 The file plots, but the attribute table no longer displays the Japanese characters.

The writeLinesShape() doesn't have an encoding option, so I suggest this may be a bug with the maptools package that you might want to raise.

In the meantime can you remove the characters to see if the writeLinesShape() file opens in ArcMap?

Not the answer you're looking for? Browse other questions tagged arcgis-desktop arcmap r encoding maptools or ask your own question.

3
CRS not embedded by maptools in R
3
QGIS 2.14 Plugin Encoding Error
1
How to fix Excel/Arcmap "data type mismatch" error?
1
Issues with OSM encoding
2
sf equivalent of R maptools package's SpatialLinesMidPoints
0
How to change the encoding once a spatialpolygon is loaded in R and how to speed up loading a geodatabase .gdb file?