Why did my data points shift position?

Here is an example of my issue: 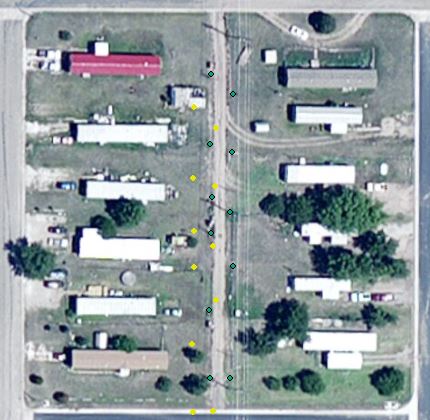 There are two point layers displayed in this image:
The yellow dots are my currently used layer with the most updated data.
The green dots are legacy data from when the points were originally collected.

The green dot positions are accurate.
As you can see, the yellow ones have shifted south-west by a considerable amount.

Both layers have the same information under "Source":
EDIT: Within the data frame, they have the same coordinate system. But from the Catalog properties, they are different

The offset seems to be pretty consistent across all of the data points.
Does anyone have an idea of how this happened to my data?
(Highly likely that it was user-error on my part, but I need to know how to reverse this mess I have made)

It seems you've a problem with the coordinate system. Now you've the same CS for both layers but probably one of them has the wrong one. You should try to check this first, then, if this is the error, you need to define the right projection before reproject for the system you want.

If this is not the error, as the shift position is consistent, you can fix it in editing mode. You should select all the yellow points and then, with the snapping on, you move one yellow point (if they are all selected they will all move) for the correspondent green point. This way you will fix the problem.

Not the answer you're looking for? Browse other questions tagged arcgis-desktop coordinate-system point or ask your own question.

2
How do I set a CRS when it isn't listed in QGIS? (Mac, not PC)
1
Using a Local Datum Plane (LDP) scale factor within ArcMap?
1
Formula to convert State Plane Coordinates to Latitude and Longitude
1
Projecting to EPSG 4326, WGS 84 Yielding Different Results in QGIS, ArcMap
0
Calculating distance from multiple points to one point
2
Performing QGIS Datum Transformation from WGS 1984 to NAD 1983?
2
In ArcGIS can a feature set use multiple coordinate systems?
0
ArcMap "datum transformation is expected, but the parameter is empty" projection error
1
Converting Web Mercator (3857) to NAD 1983 StatePlane Texas Central FIPS 4203 (2277) in ArcMap?