...How to do the trick cited upper via gdal or an other non GIS-destructive way on such .tif files ?

Note that I wish to keep GIS properties (geolocalisation). 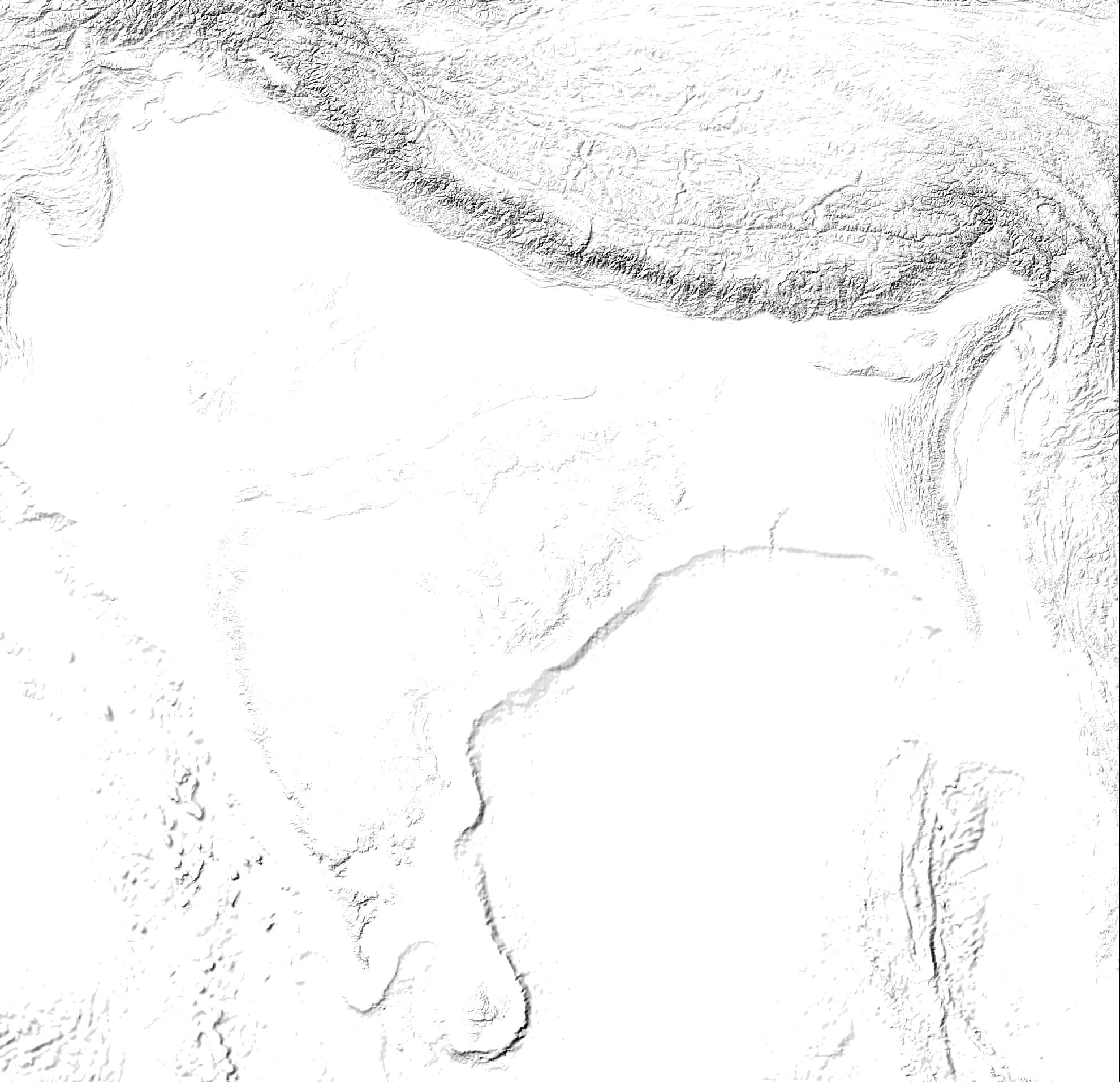 Each set of 3 images below should be read such as "grey (band) + opacity (band) = transparent result". You can test these processes within minutes via the associated github hosted makefile. Process #3 is the one which I recommend, with a threshold between 170 (keeps strong shadows) and 220 (keeps all shadows). Process 3 provides the strongest shadows and avoid greying-whitening effect. Adapt the resulting layer's overall opacity as needed. The equations in --calc="<equation>" may be improved as needed as well, using gdal_calc.

gdaldem hillshade produces a one band grey scale file with pixels values range=[1-255], aka from the darkest shadows to the most enlighten pixel. For flat areas, px=221 (#DDDDDD). NoDataValue pixels get default nodatavalue 0, also, the darkest black in input and in output is and should be 1. With no opacity band defined, opacity is 100%. 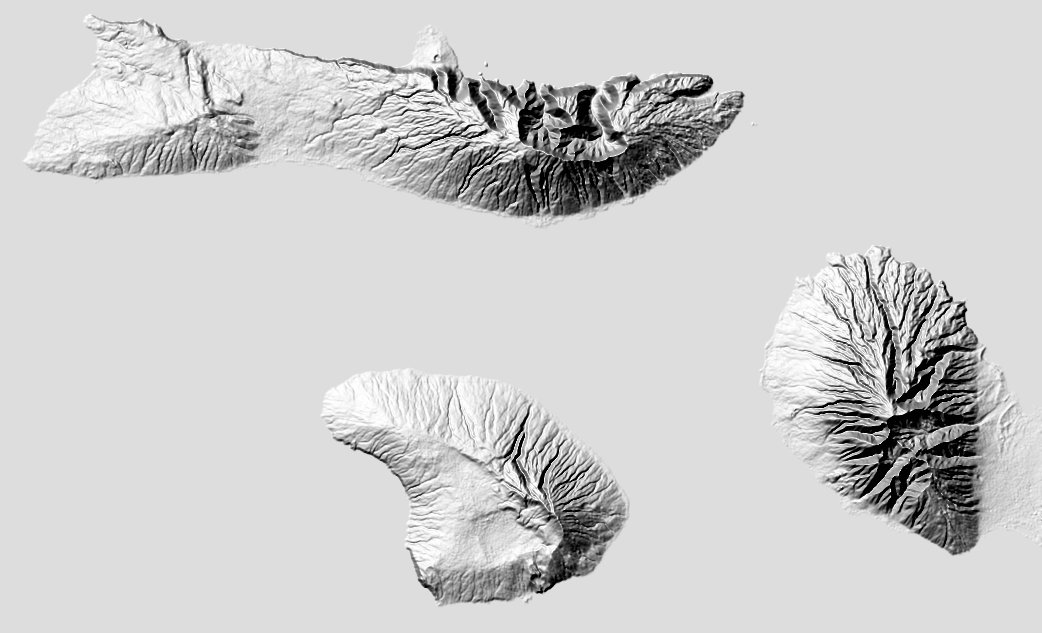 We want to define and control a 2nd opacity band !

We want one opacity band -b 2, generally the invert of the hillshade or a related function of that. We can crop out non-relevant areas (#2). It must be a continuous range of opacities such px=[1-255], otherwhise there is no elegance.

gdal_calc can be use to both do math on pixels from input files A,B,C... and check boolean values such as A<220, which returns 1 (true) or 0 (false). This allow conditional calculus. If the condition is false, the related part of the equation is nullified.

The following provides a very good two-bands results with the standard gdal hillshade greys and whiter areas made increasingly transparent : 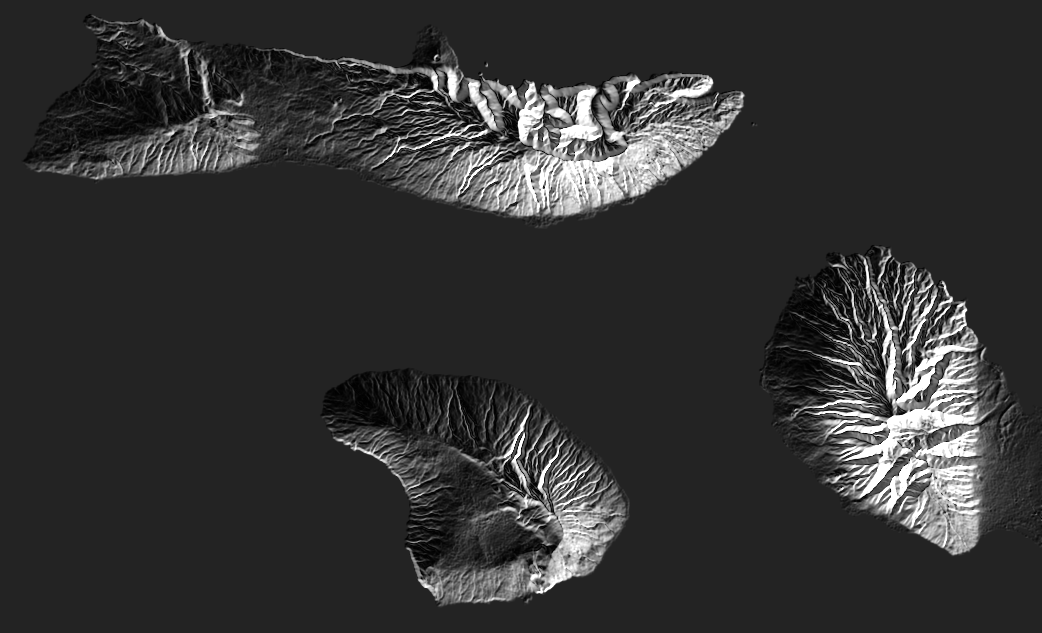 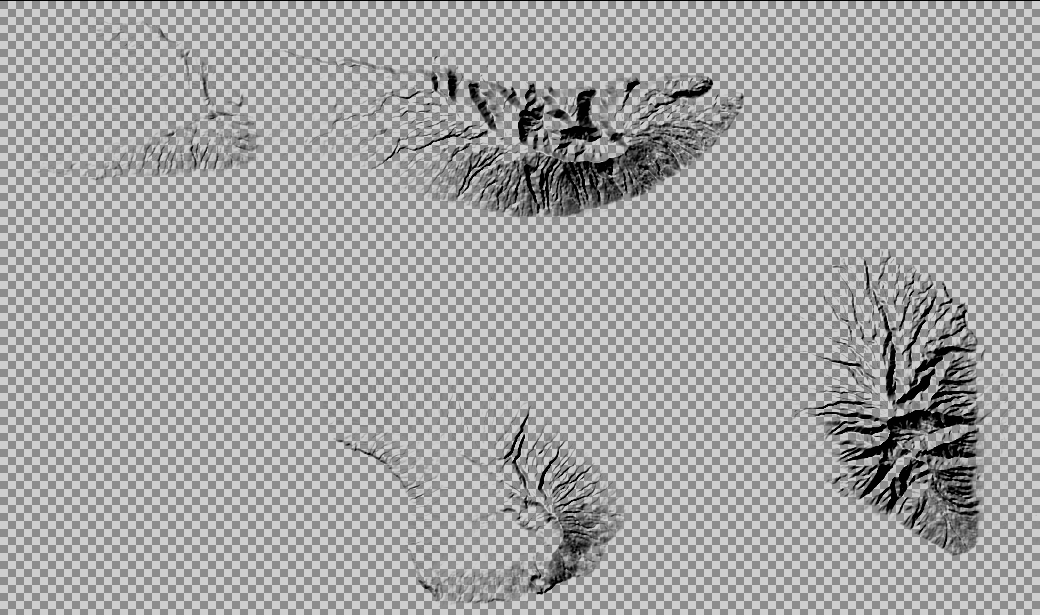 2/3 of the pixels on -b 1 (greyscale) become invisible to bare eyes when the opacity -b 2 is added, yet, these pixels keeps various whiter -b 1 and low opacity -b 2 values. They can be made all white transparent [255,1] pixels, allowing a better compression rate: 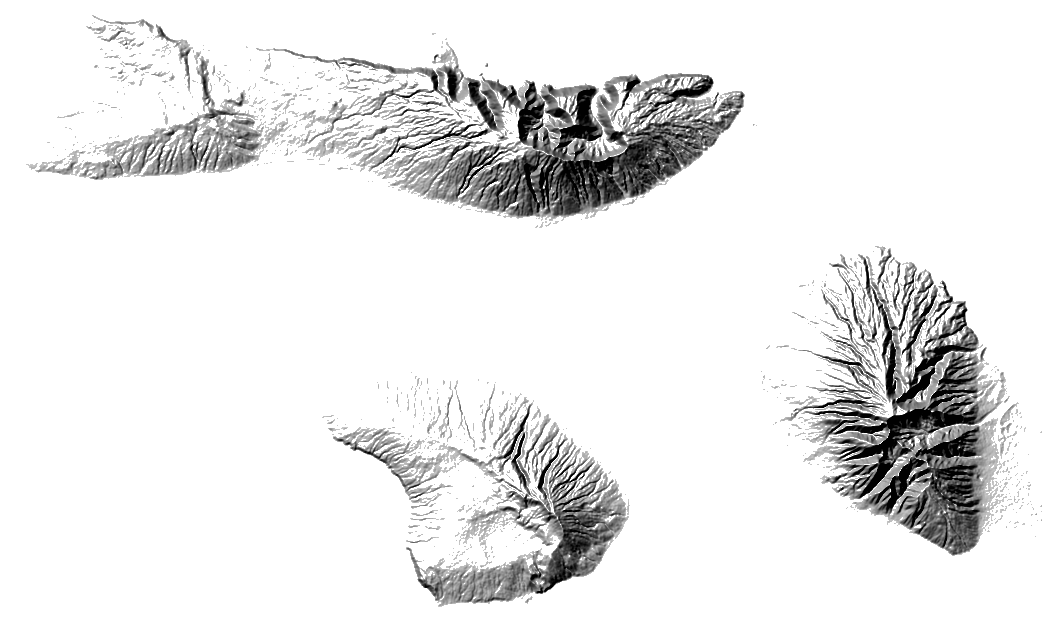 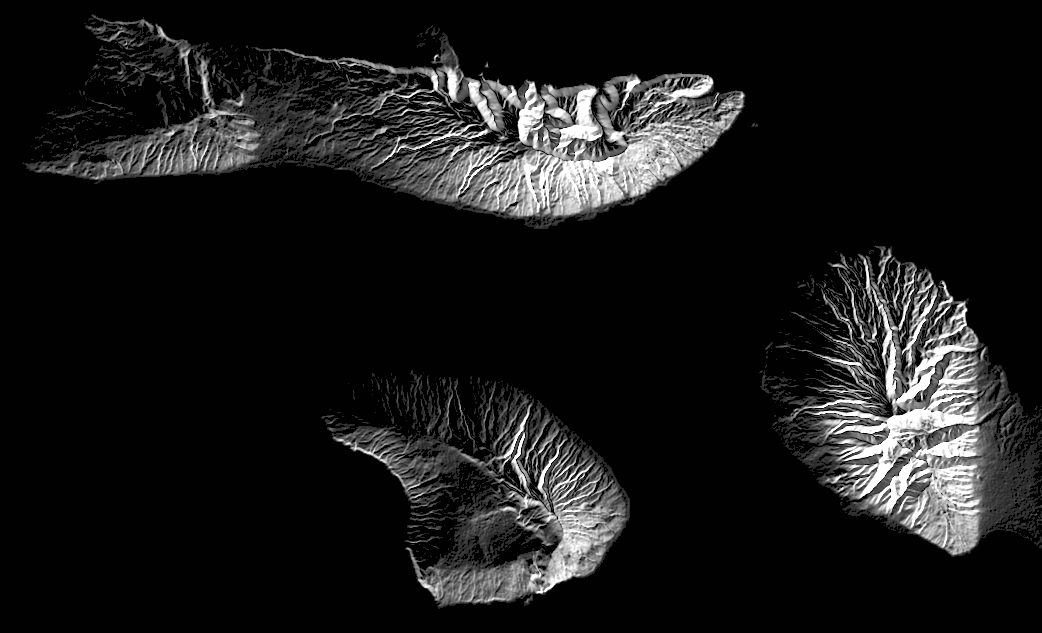 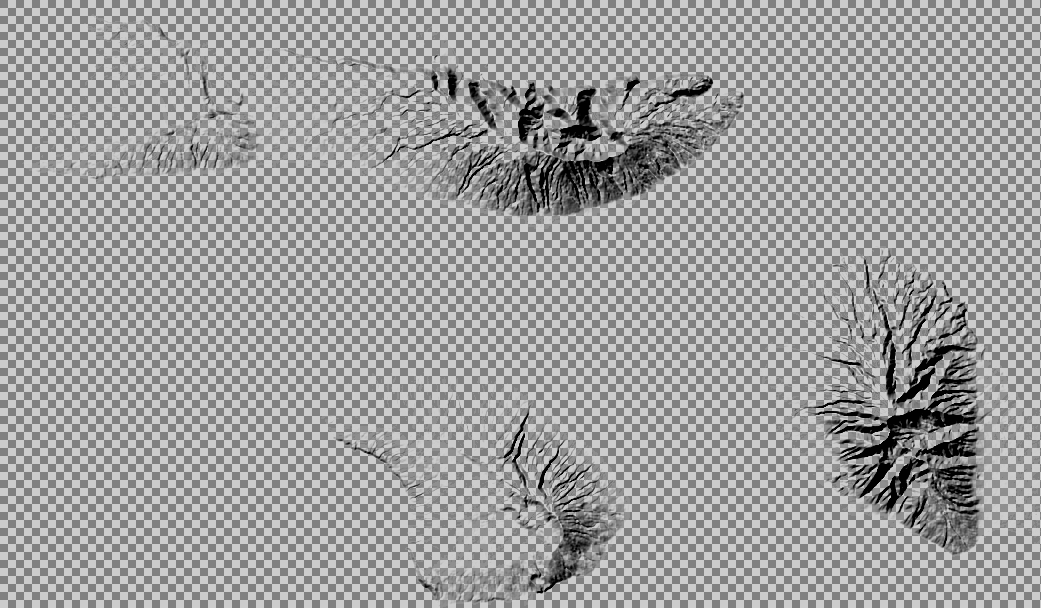 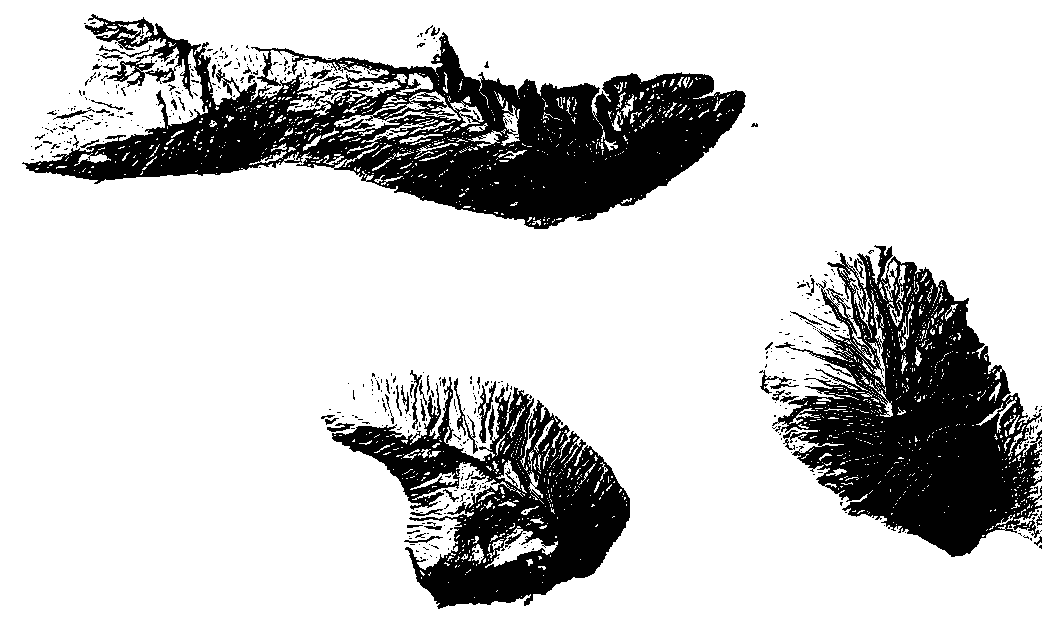 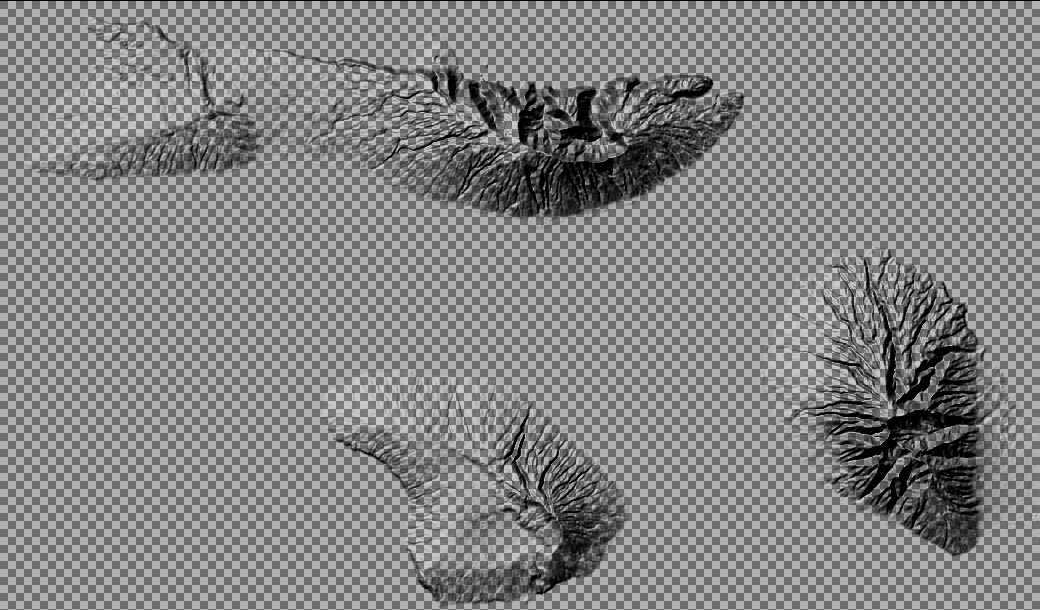 Create a transparent hillshade has for immediate objective to remove the plain's former grey areas and associated unwanted but ubiquitous greying-fading effect. The wished byproduct is an increased control over the final visual product. The process described remove most grey and all white pixels. The colorful background plain image will keep its chosen colors when overlayed by the transparent-to-black hillshades, only the shadowed areas will be darkened. Comparison of process #2 (left) and #3 (right) below. 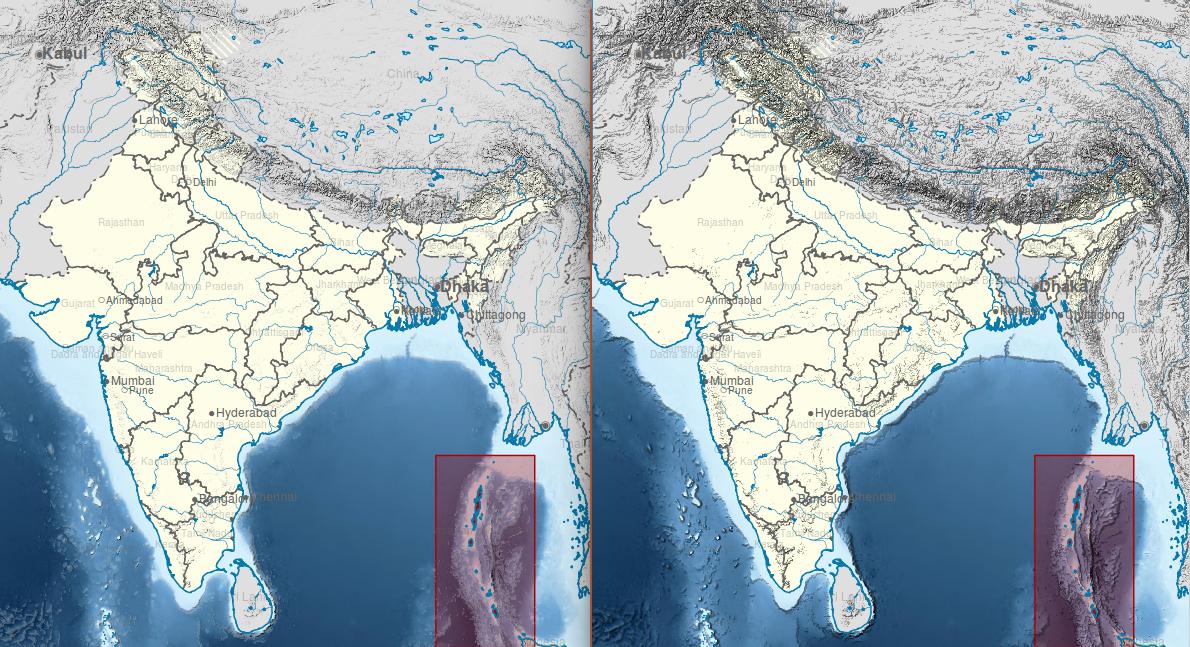 Zoom, please notice the shadows (before vs after) :

White areas: One may also wish to keep the most enlightened areas to increase the 3D feels. It would literally be the symmetric of this current approach with minor threshold changes, then a merge of both outputs via gdal_calc. The plain would be 100% transparent, the darkest shadows and lightest enlighten areas opaque.

Smoothing: The input hillshade may be pre-smoothed to get a better end result, see Smoothing DEM using GRASS?

Another way to get the same result of a non-grey canvas more suitable for combining with other layers is the 'combined' option in gdaldem.

It performs a slope and hill shade and combines the two in one operation. Areas of 0 slope are white. Areas of 90 degree slope are black for the slope shade, with some illumination added by the hillshade layer.

Then use a multiply layer compositing mode to 'drape' this over other layers. 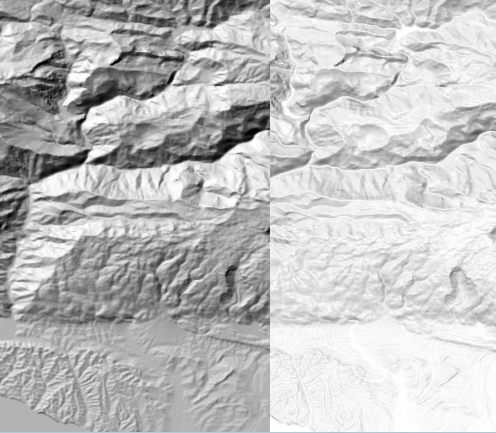 Combined shading multiplied with OSM base layer (opacity around 50%) 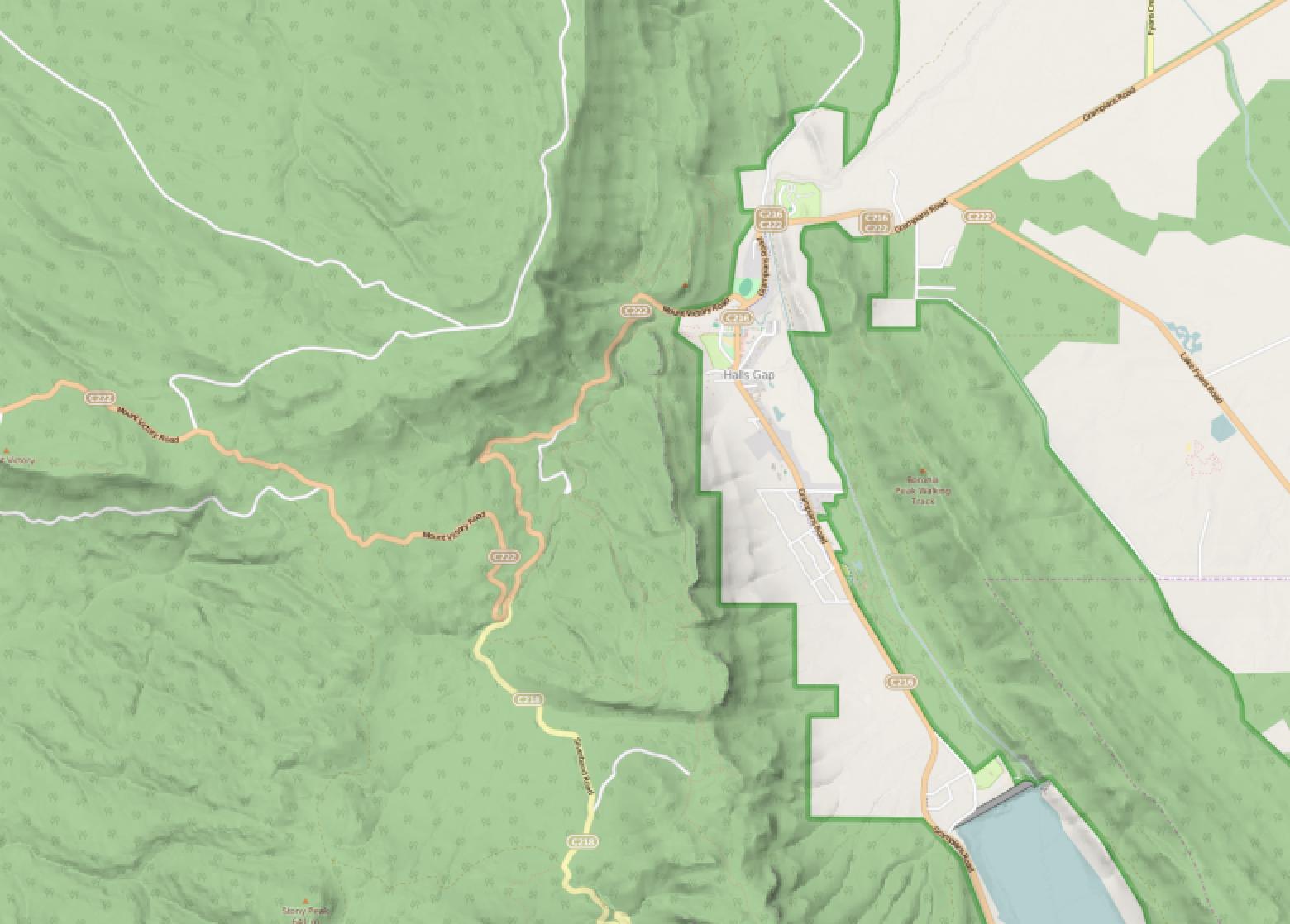 There is a gdal + convert solution which gives good visual results. The trouble with this solution is that convert destroys geographic informations which you then have to restore. It increase the number of action to run.

Not the answer you're looking for? Browse other questions tagged gdal dem gdal-translate hillshade gdal-calc or ask your own question.

46
Smoothing DEM using GRASS?
10
How to create composite hillshade?
2
Creating transparent PNG tiles (for TMS service) from transparent TIFF
1
Is it possible to create .OVR (like by gdaladdo) as smooth as QGIS oversampling feature of raster layer?
1
Losing resolution of my DEM/TIFF when converting from HGT
0
Add hillshade to naip imagery