Calculate scale of a raster

A raster has a cell size of 200 meters. What is the corresponding scale of the raster?

New to GIS, using ESRI, semester is almost over but this one question is confusing. I didn't think you could calculate the scale of the raster in that you are given cell size of 200 meters and to my knowledge, or lack there of, the corresponding scale would be whatever the data set is using or that you adjust the scale to.

Rasters don't really have a scale, they have a resolution, which in your case is 200m. You can calculate an appropriate viewing scale for a given raster resolution based on the ability to distinguish features.

The ArcGIS Blog post On map scale and raster resolution discusses this:

In 1987, Waldo Tobler, renowned analytical cartographer (now emeritus from University of California-Santa Barbara) wrote, “The rule is: divide the denominator of the map scale by 1,000 to get the detectable size in meters. The resolution is one half of this amount.”

So here is the appropriate resolution for a select set of map scales: 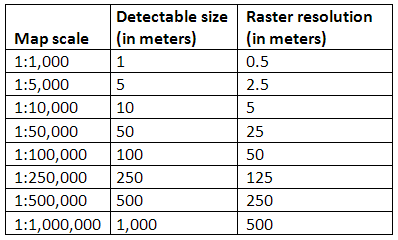 For example, if you were not sure what resolution imagery you needed to acquire to detect features at a map scale of 1:50,000, using Tobler’s rule above, you can determine that imagery of approximately 25m [50000/ (1000*2)] resolution would be sufficient.

Similarly, if you need to find out the mapping scale from a known imagery resolution you can do so using the formula below:

Two, as used in the equation above, doubles the resolution. Then that number is multiplied by 1000 to get the map scale.

according to our good friend "Tobler," whom stated in order to calculate map scale, multiply the raster resolution (which should be in meters) by 2 multiplied by 1000. So in my above question my equation ended up like this here:

of course all great data sources deserve the appropriate credits so after juggling the reverse of another equation I sort of derived the answer I need! Thanks ESRI, in class and for lab instruction. Thanks Rajnagi!!

the reference I used was originally posted by rajnagi on December 12, 2010

"On map scale and raster resolution"

Not the answer you're looking for? Browse other questions tagged raster scale or ask your own question.