How to identify polygons with “flag” sliver errors

Working in ArcMap, I have come across errors in a polygon layer that I will call "flag slivers" (taken from similar language in parcels call "flag lots"). These sliver polygons (see image below) are typically composed of just one additional node that user has accidentally added.

In the images below, the "flag" and the "flagpole" are one single-part feature where the "flagpole" just overlaps itself. The left-hand image has a total of 5 nodes. 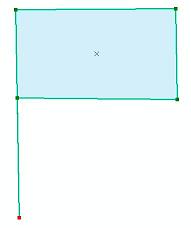 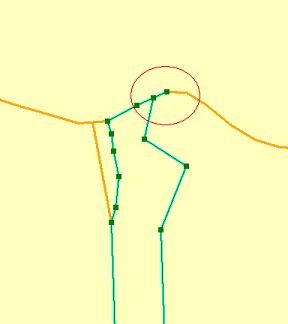 When seen alone the errors are very obvious, but when multiple polygons are adjacent, they are nearly impossible to see because they appear to be the boundary between 2 polygons.

This likely happens because they are using a shapefile based editor, and therefore I cannot implement any topology-based editing rules to prevent this from happening in the future.

Does anyone have a way of identifying and resolving these types of errors? I would prefer an automated method of both identification and resolution since field users are the ones who created the errors, but I am stuck cleaning up after them. Thanks.

if you have access to Safe Fme tools you will find useful the transformer called spikeRemover, give it a look. You may try a downloadable limited version of SAFE FME or check your ArcGis license for "FME Extension for ArcGIS"

I'm not sure where your problem occurs, or where you have the possibility to avoid/fix it. But I've seen this a lot in our SDE-database although geometries in SDE should always be correct. In our case it was because we imported shapefiles using ArcObjects into the SDE. When the geometries was stored they snapped to the grid of the SDE and thus created incorrect geometries with the slivers you describe when the geometry had a thin spike. This because shapefiles have full double precision for the coordinates and the SDE a coarser grid.

With arcmap 9.3.1, I would add a field called Flag (or maybe FlagFlag?) and use VBA code in the field calculator to calculate this field.

The VBA code would dim a variable as ITopologicalOperator3 and set it to the Shape field.

It would then call the not-so-simple IsSimpleEx method.

Set the Flag field value to the esriNonSimpleEnum. Presumably the error you are concerned with would return esriNonSimpleSelfIntersections.

With 10.0 there may be a way to do this with python in the calculator (?) ... I'm not sure. I would use an add-in command. IMO Esri should provide support for c# in the field calculator. After all, the c# compiler is installed as part of the .NET framework.

The code I posted here might find flag poles if you apply a Definition expression "Left_OID" = "Right_OID" to the resulting polyline featurelayer.

This Python Script is a handy tool

"EliminateSlivers.py cycles through all features in a polygon shapefile and removes the ones from the output shapefile that fall below a given area threshold.

Geoprocessing operations and cluster tolerances could result in the build up of extra, tiny sliver polygons. These may be meaningless and could distort the reliability of the spatial data."

Note: you will have to test with different tolerances with your data (take a copy of your data first)

I worked with Soil Survey office, and I periodically checked their soil polygons. What I do is checked for slivers. I would sent the featureclass to coverage and then build them to label to identify the errors. If you see 2 labels in one polygon, it is an error. If it is one label per polygon, you know it is correct. I would create a featureclass as a point to mark an error. Or you can select a or many labels into a new featureclass. This way you can come back and fix the error. It works for me very well with the soil polygons. I use that to inform soil scientists to fix the problem.

That is just mine of way to identify the problem. Just sharing that with you.

If the identification is not a major point and just the automated fix try this. Add the data to a new blank Map Document, then ;

Here we go there are a few ways of working through this and in my opinion the most elegant is using an Extension called GIS Data Reviewer. GIS data Reviewer allows you to create customised and simplified checks on spatial and attribute accuracy in addition to core Topology. Within Topology there are things that are not available that are part of the standard checks for Data Reviewer Like

Not the answer you're looking for? Browse other questions tagged arcgis-desktop topology slivers or ask your own question.