Finding number of trips in each segment of road 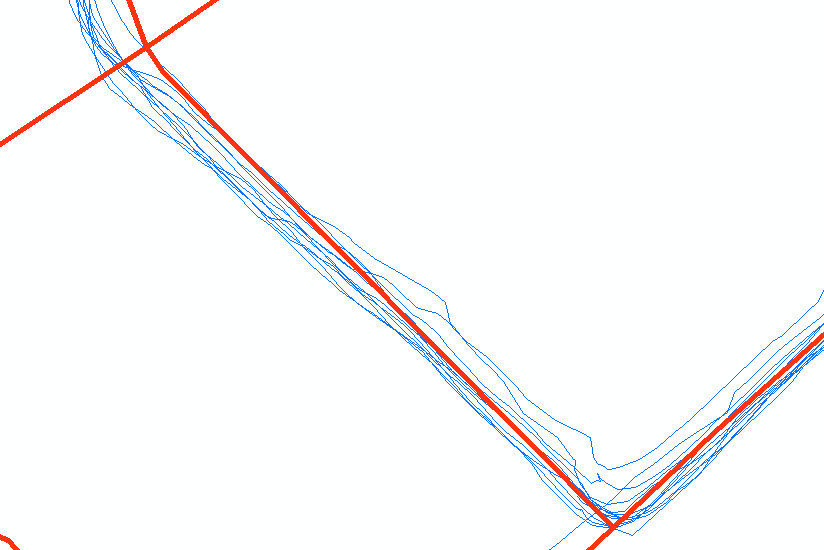 I am using Arc GIS. I do not have knowledge of python, but could learn and edit if there is code available for similar tasks.

For example, if one road segment between two blocks is used twice, then i want one column on attribute table of the road segment to have a value of 2.

I'll assume your street line layer is already divided up into individual line segments. As I originally mentioned in a comment, those GPS tracks appear to be rather detailed and it might be worth Generalizing them as a first step. This should reduce processing times significantly, but you need to strike a balance between extraneous vertices and being able to preserve curves and such in your path.

The simplest solution is to Spatial Join your GPS track (join_features) to your line segments (target_features) using a one-to-many join operation and a within_a_distance match option using an appropriate distance. This should give you a new feature class that resembles your street lines but each segment will be duplicated once for every GPS track.

But because of the misalignment this method will produce false matches everywhere that an unused segment is within that distance - for example intersections you'll get both the streets that the GPS track follows as well as the other streets that meet at that intersection. (I think - not sure if within_a_distance looks at the entire feature, or if it will catch it if only a part of the feature is, but I suspect the latter). As a result you may need to do some cleanup of this resulting feature class to delete these extra segments. This could potentially be done by buffering a GPS track to a similar distance as used in the join, then using select by location to grab only line segments that are completely_within the buffer (or invert and delete the ones that aren't).

Once you have the proper street lines along the tracks, which have all been duplicated by the join, you can use the Summary Statistics tool with street line original segment ID as a CASE field, as I described at Counting traversed arcs on routes to write attributes using ArcGIS for Desktop?. The resulting table should have one row for each segment with a count of the number of duplicates, which is the number of tracks that traversed that segment.

If you need the GPS tracks to match up to the street lines exactly, I'll create another answer (or you could ask another question specifically on that) with details on Snap and using Intersect instead of a Spatial Join. That would eliminate the problems with crossing streets, but might be more work than the above method. Both end the same way - creating duplicate street line segments, once for each track that travels it, and then using Summary Statistics to get the traverse count.

You are using segments, so your road network must be divided into segments. If your network dataset is like many, it consists of many segments, with breakpoints where there are no intersections. You'll need to Dissolve your network, then Intersect it (with itself). That will create a points layer you can use to cut your networks into the segments you want.

Once you've done that, you could use ModelBuilder with an Iterator (by segment) to Buffer and Clip a Layer(must be a layer!) of your network. Presuming each of your paths (in blue) have a unique ID), you can then use Summary Statistics on each of the clips to summarize the number of trips along each segment. You can then Merge all the Summary Statistic into one table, and Join that back to your network, to symbolize and analyze.

There are doubtless more elegant ways to accomplish this, but this can be done without knowledge of Python, or tools outside the most basic ArcGIS license.

Not the answer you're looking for? Browse other questions tagged arcgis-desktop gps or ask your own question.

11
What algorithm should I use to remove outliers in trace data?
-1
Plotting points into segments on roads exactly with ArcMap?
4
Counting traversed arcs on routes to write attributes using ArcGIS for Desktop?

5
How to join number of point features into attribute of nearest line segment using ArcGIS Desktop?
0
How do I find the slope of road segments with point elevation data of the same linear path
0
Finding number of lines passing through common segment of lines from overlapping multiple line shapefiles?
2
Count number of overlapping map matched GPS trajectories with road network