How to have newly added lines split existing lines where they intersect, using QGIS

I have a line shapefile where the lines form a closed polygon. Using QGIS (2.8 on OSX 10.7) I would like to add lines to the layer, basically splitting the polygon into quadrants. Then, I will need to convert the line shapefile to a polygon shapefile, so that the newly formed quadrants will be separate polygons.

In order to create a polygon shapefile with the necessary quadrants, it seems that the lines need to be intersected, or else I only get the main original polygon as a result (using the Polygonize process). I have tried the "Split lines with lines" option (using my line shapefile as both the input and output layer), and I have tried v.clean from the GRASS processes, but neither of these approaches split the lines where they intersect (either in the middle, or on the boundary) in all cases, only some.

I feel that the easiest way would be if the new lines would split the existing lines when I add them (and also split each other where they cross), but I can't figure out how to do that.

Very good points by @ChrisW. An alternative which may do what you seek is to first polygonize your line shapefile and then create your quadrants (I've included a simple example):

I then used the Lines to polygons tool:

Now you can use the Split features tool (from toolbar, Edit > Split features) which allows you to split your feature (line, polygon etc) into multiple features: 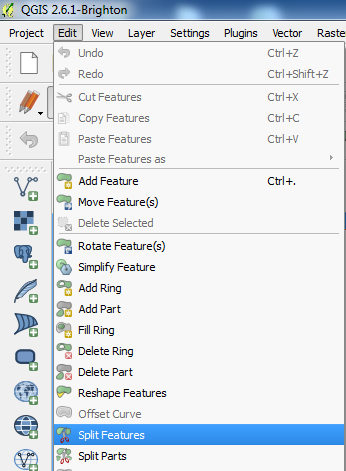 You basically left-click to start drawing a line as to where you want the features to be split, left-click again to finish drawing the line and finally right-click to execute the split:

Now each of the quadrant is its own feature:

Not the answer you're looking for? Browse other questions tagged qgis shapefile grass qgis-2.8 or ask your own question.

2
How to unpolygonize and remove outermost border?
6
Making polygon from intersecting lines in QGIS using Polygonize or similar?
2
How to create polygons from a polyline graticule?
4
Removing identical lines from layer in QGIS
2
QGIS count how many lines cross a polygon
11
Join / merge lines that touch and intersect in QGIS
0
How to split lines where a different set of lines intersect them, no vertices
2
Split layer with lines or with Polygonize (and keeping all features intact) - QGIS 3.18