How do I specify a CRS for a fictional game map in QGIS?

I am about to start playing a steampunk RPG game called The Iron Realm, which uses a fictional world map. I have recently started using QGIS v1.7 and have no real experience with GIS sysstems. I have imported the map as a raster layer into a new QGIS project and have created some vector layers from it, including a polygon layer for the regions, a point layer for the towns, and a line layer for some added railway tracks and roads.

The game master has just added a scale and some lat/long information to the game map: 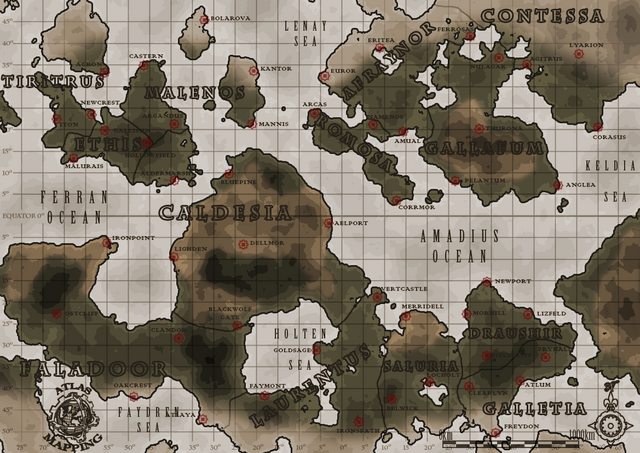 I assume from this that I can now add a CRS to my QGIS project. I have no idea how to do this and would really appreciate some help, so that I can use my QGIS project with the game effectively. I assume that I will need to create a custom CRS, but I am completely ignorant about how to do this. I think it has something to do with proj.4 but I have no idea how to use it.

There are a couple of things to note about the map. First, the lines of latitude are the same distance apart, which means it is in an equirectangular projection. The upshot of this is that neither distances or angles are preserved making it not so useful for navigation. The second point is that it has a scale bar in linear units. Because distances on the ground vary according to their latitude when viewed on this map, the scale is mostly meaningless.

However, as this is a game world, you are at liberty to play around with it to your heart's content. The first thing you can do is decide how big a world it is by assuming the scalebar represents horizontal distances at the equator. It looks to be about 32 degrees over 1000km, giving you an equatorial circumference of 11,250,000m and a radius of 1790493.11m, making it about the size of the moon. The next thing is that the earth is approximately an ellipsoid, being flatter at the poles. For the earth, the inverse ratio of pole-to-pole radius and equatorial is about 298.25, the moon is almost spherical at 800.

Armed with that information, you are able to create your proj4 definition:

+lat_ts isn't strictly necessary, but is useful for reference. It is the "latitude of true scale", which is what we based our equatorial circumference from. +lon_0 represents the longitude of the centre of the map, which in this case is the prime meridian.

Opening up QGIS and selecting Custom CRS..., I've put in our parameters into the test box, and entered north 0, east 32, which gives me 1,000,000m which is our 1,000km we were expecting for that many degrees at the equator. So go ahead and create your own CRS with a memorable name.

And that's it! As I said before however, in this projection your east-west distances will be increasingly inaccurate away from the equator, so it might be worth creating a few more "local" projections for different countries, as well as a lat/long CRS, but that is getting a bit deep at this stage. You may find it helpful to read up on map projections (just Google it), and read the Wikipedia entry for map projections, which should give you a better idea of how it all works.

Incidentally, a long/lat CRS for your world will simply be:

If he gave you lat longs (depending on the format) there are only two locations that could be worldwide. If you have - symbol in front of the longitutde there is only one location.

On second thought it could be that the game has a much smaller ellipsoid than ours. Making the entire world circumnavigable in shorter time. If so you could just modify the ellipsoid height of wgs84.

25
Are any fictional worlds available in some GIS format?
4
How to create a map from a video game
4
QGIS custom CRS for map of manufacturing shop floor
3
What projection to use to get a game map into QGIS?

13
How to enable projection transformation in QGIS
4
Using QGis for an imaginary plane world
3
What projection to use to get a game map into QGIS?
4
How to create a map from a video game
1
How to setup CRS for QField