Enforce topology rule over a shapefile

I have a couple of shapefiles, the first one is a set of points, while the second one is a set of lines. I need to regularize the shapefiles in order to be able to generate a graph (adjacency list / paths) out of them later.

The set of lines has many dangles, with both undershoot and overshoot problems. I want ArcGIS to mark the suspect points and possibly offer me a correction to apply, on an individual basis.

I've seen the tutorial "Using geodatabase topology to fix line errors", which seems to go where I want.

However, in order to create a "topology" with a "Must Not Have Dangles" rule, I need a "geodatabase". I'm very new to GIS systems, and I'm trying to figure out a way to convert my shapefile to a geodatabase. I did the following

However, after adding the "Must Not Have Dangles" rule, and running Validate, I am told there are no errors. I can see there are errors, there are obvious dangling lines, so why aren't they detected? 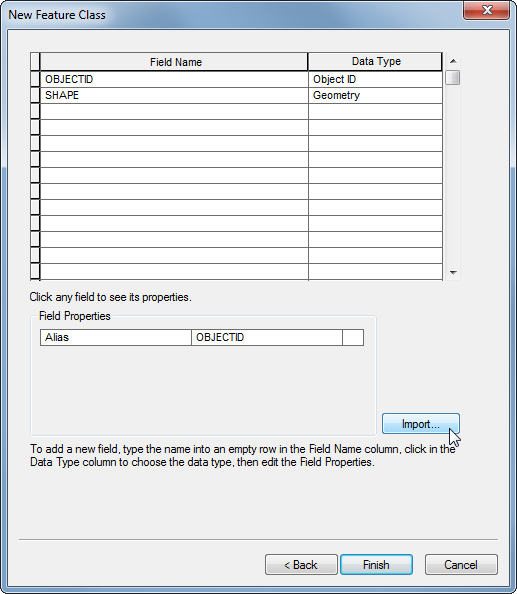 When I'm finished creating the topology, I get this warning:

This is the final result: 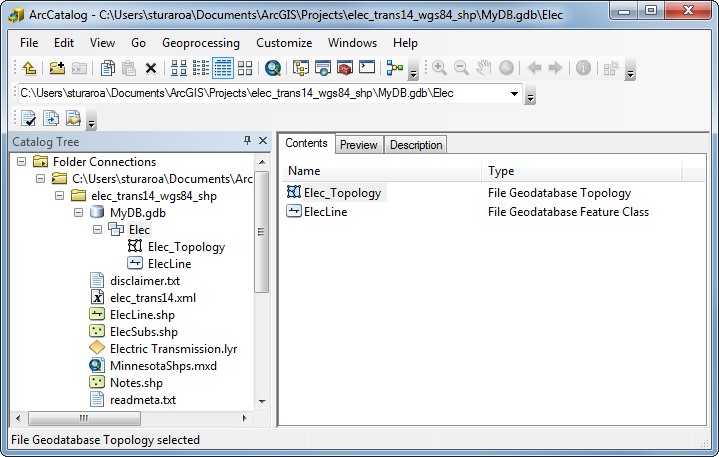 Shapefiles do not support topology directly, as you have discovered. The data must first be imported in to a geodatabase, and specifically a feature dataset within that geodatabase. If you need to continue on in shapefile form, you'll have to export it back out once you're done topology checking and editing.

The answer to the actual/original question is that you had not imported any geometry to the feature dataset that was participating in the topology. Your step six created a new, blank feature class and the Import button you used only brought in the fields from your shapefile, not the actual lines. This is what the message in your second screenshot indicates (topology is valid, but there are no actual features participating).

To do that you need to right-click the feature dataset and rather than choosing New, choose Import > Feature Class (multiple or single depending on if you want to bring the lines and points in at the same time, but note everything in a feature dataset must be in the same coordinate system) and select the line shapefile. This will import the actual line data into the feature class within the feature dataset.

Not the answer you're looking for? Browse other questions tagged arcgis-desktop shapefile file-geodatabase topology or ask your own question.

3
Cause of selected [ArcSDE 10] feature dataset does not contain any feature classes which can participate in topology?
9
How do I save topology errors in QGIS?
4
QGIS Topology Checker Wrong
0
Loading Topology to Parcel Fabric gives Must Contain Features Error?
4
Topology Checker - Polyline layer, How to detect overshoot/undershoot errors?
1
Automatically marking all endpoints as exception in ArcGIS topology?
1
All feature classes are not shown when creating new topology in ArcCatalog?
1
Connecting Add Feature Class to Topology to Add Rule to Topology in ModelBuilder?