The spreadsheet looks something similar to this:

The result has to look something like this (notice the charts per every district): 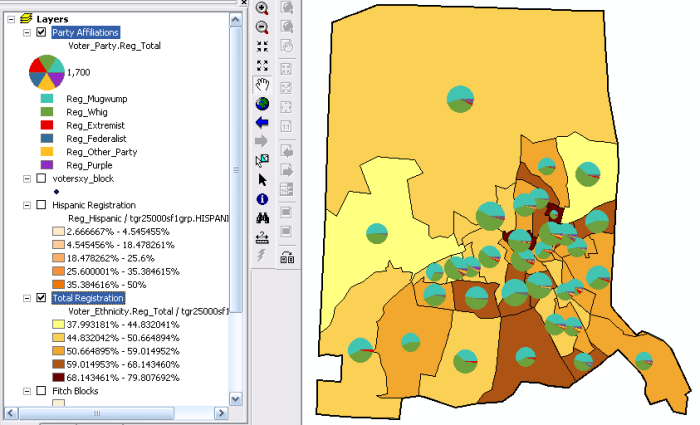 arcgis-desktop symbology chart
Share
Improve this question
edited May 30 '15 at 8:44

The short answer is you can't, at least not with that symbology method and in a single layer given the way your data is organized. A pie chart shows portions of a whole, and symbology for a layer must be based on the same fields. Each of your car brands is a separate field, so you must show all ten in every pie chart in order to ensure you show the top five since each district may have a distinct top five. Think about a single legend for that symbol - it would have to show all ten so you'd know what each color was.

There's only one way to pull this off (someone prove me wrong, please!), and you'd either need multiple legends (at least two) or a dummy layer to make a legend from. First you'd have to group your districts by creating a new field and classifying each according to a possible top five combo. So Ford Honda Toyota Mazda Chevy would be 1, Ford Honda Toyota Mazda Dodge would be 2, and so on. For the record, there are 252 possible combinations of five selections from ten choices with no repeats where order doesn't matter. You may have fewer groups than that since it's entirely possible not all combinations would be used.

Next you'd have to add your layer the same number of times as you end up with combinations and put a definition query on each so they only show the districts with the same top five. You could also add a dummy layer from a separate dataset that has a single row with equal numbers for all cars that would be used to create a neat legend.

With that done you have to symbolize each of the layers with the chart symbology, picking the correct top five attributes to be included and making sure to manually set consistent colors. Meaning Mazda is yellow everywhere, for example. You'd then have your desired map.

Depending on how many districts you have, it might be faster just to create individual charts for them (be that in Excel or ArcGIS) and scale/place over the district. Or just deal with showing all ten and not just the top five.

Not the answer you're looking for? Browse other questions tagged arcgis-desktop symbology chart or ask your own question.