Why does my hillshade .ovr display in lower resolution in QGIS?

I have viewed a lidar terrain model hillshade .ovr file on QGIS and Arc and Arc has significantly higher resolution than QGIS. Any thoughts as to why this would happen and ways to enhance resolution in QGIS?

If the associated files have the extension adf they are most likely ArcGIS Grid files. An ArcGIS Grid has the following general file structure:

The file marked with double stars contains the pixel information (the file with the greatest file size), the other files contain metadata and statistics.

You can convert such a grid in QGIS (tested on version 2.8.2) using 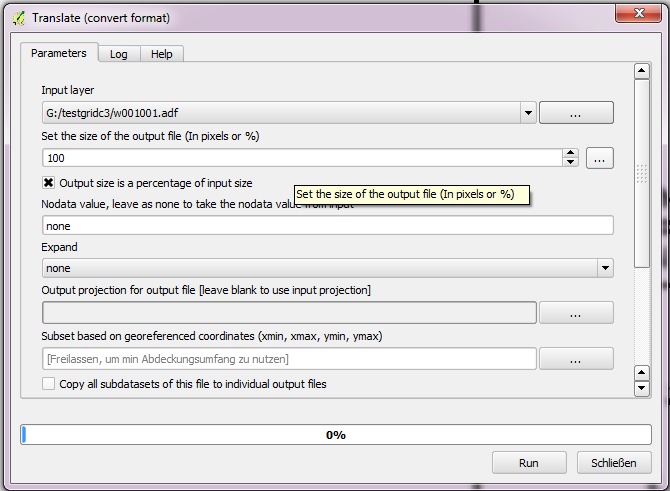 This command outputs an image in uncompressed TIF format, having the same resolution as the original grid.

Mention that ArcGIS Grid RGB rasters are build as a stack of grids. Each stack member is a grid (R, B, or G), and one virtual grid is the stack. The latter file contains no image information, but the name of the grids representing the stack components. You cannot convert such a stack in one run, but have to convert each component and to composite the files afterwards.

To combine several images as bands of a composite image use Merge with the Layer Stack option checked:

More information on image composition read this and this article.

Not the answer you're looking for? Browse other questions tagged qgis arcgis-desktop lidar resolution or ask your own question.

0
Saving geotiff in R - why resolution on x and y is not the same?
18
When dealing with rasters of varying resolutions should one resample to the highest or lowest resolution?
10
Scale and Z factor have no effect on hillshade analysis in QGIS
6
Hillshades created from QGIS Virtual Raster Tables sometimes have unwanted artifacts
1
Does the location of a DEM affect hillshade outputs?
1
Why does Google Earth Pro change my raster resolution?