I've been trying to find out what the projected bounds are for EPSG:3575 but have not been able to find a definitive answer. Normally, I'd just use the values from EPSG.io but when I tried these in mapserver and geowebcache they both threw back error messages saying 'min x, miny, max x, max y not valid'. I've also tried the values from spatialreference.org and whilst these are valid, the cache gridset I created in GWC then did not work with several WMS services from other organisations. I have also found this site http://nsidc.org/data/atlas/epsg_3575.html, but this just gives the same info as the EPSG registry in effect. Ive tried converting the 4326 bbox to 3575 in a couple of programs (ogr and a web conversion site), but these just out with differing answers, neither of which look correct. any help would be gratfully received!

EPSG:3575 is a Lambert Equal-Area Azimuthal projection centered at the North Pole. Although it uses the WGS84 datum, the underlying calculations for this ellipsoid are performed by making a (small) equal-area deformation of the ellipsoid to a sphere (using authalic latitudes) and then applying the spherical projection formulae. Thus, it suffices to understand the spherical form of this projection.

[p. 185]. For the north polar aspect, the "given angular distance" is just the co-latitude, running from 0 degrees at the North Pole to 90 degrees at the Equator and approaching 180 degrees near the South Pole. As a result, Snyder writes,

The polar aspect ... has circles for parallels of latitude, all centered about the ... Pole, and straight equally spaced radii of these circles for meridians. ... [The] spacing of the parallels gradually decreases with increasing distance from the pole. The opposite pole ... may be shown ... as a large circle surrounding the map, almost half again as far as the Equator from the center. Normally, the projection is not shown beyond one hemisphere (or beyond the Equator in the polar aspect). 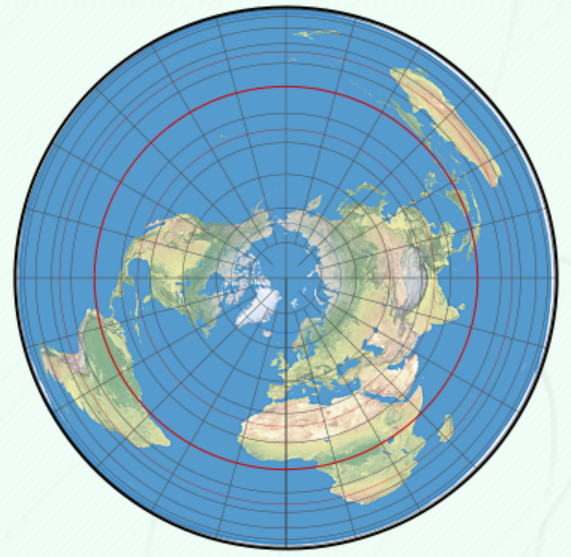 This image (from mapthematics.com) shows the full Lambert Equal-Area Azimuthal projection in one of its North polar aspects: it is equivalent to rotating EPSG:3575 by 10 degrees counterclockwise. The heavy red line marks the Equator. The outer black circle corresponds to the South Pole.

Snyder's account indicates that although this projection can be used for the entire globe (except for one singular point), it is usually used only for hemispheres. We can easily determine its limits in either case, because of the equal area property. Writing R for the sphere's radius, the total surface area is 4*pi*R^2, whence a hemisphere's area is half that, 2*pi*R^2. Let the corresponding limiting circle (depicting either the Equator or the South Pole) be at a distance r on a 1:1 map. It encloses a region of area pi*r^2, as we well know. Whence

In EPSG:3575 the North Pole is centered at (0,0) and there are no false Easting or false Northing coordinates applied. Therefore the extent of the projection is from -r to r in both coordinates. Note that not all coordinates within this extent are valid: the sum of their squares cannot exceed r^2.

In practice, software often (artificially) limits the extent to which it will project or unproject coordinates. Thus, the reason your WMS services did not work as expected may be artificial and software-specific. The only way to determine their true limits is through consulting the documentation (which often is inadequate or nonexistent) or by trial-and-error reverse engineering.

Edit: Eight and One Quarter Percent

Melita Kennedy's (authoritative) response in this same thread indicates that EPSG:3575 is intended for use only in latitudes of 45 degrees or higher. The area of that spherical cap will be (1 - cos(45))/2 = 0.1464466 times the total surface area of the globe. Solving for r as above gives r = 0.7653669*R = 4,876,157.8 m. Thus (regardless of the longitude of origin, which only determines the map orientation) the allowed projected coordinates will lie in the interval [-r, r], just as before, and again the sum of their squares cannot exceed r^2.

The scale errors are proportional to the reciprocal of the cosine of half the colatitude. At (authalic) latitudes less than 45 degrees, half the colatitude exceeds 45/2 degrees. The reciprocal cosine will exceed 1/cos(45/2) = 1.08239... . I thereby interpret the restriction of EPSG:3575 to this limited northerly region as an implicit guarantee that scale distortion will not exceed that factor of roughly eight and one quarter percent. Such guarantees can be useful. However, why this particular factor is important compared to (say) 1.1 or 1.5 or some other finite number seems arbitrary and mysterious.

The EPSG Geodetic Parameter Registry reports the area of use (which is smaller than what the map projection algorithm usually supports) as:

The longitude of natural origin (aka central meridian) is +10 degrees longitude.

To find the minimum and maximum projected values, we have to create new points based our knowledge of the projected coordinate reference system (ProjCRS).

Not the answer you're looking for? Browse other questions tagged coordinate-system epsg or ask your own question.

76
What books, journals, and electronic resources are most valuable for expanding knowledge of GIS?

45
What's the difference between EPSG:4326 and EPSG:900913?
3
What does 'projected bounds' and 'WGS84 bounds' mean in the definition of a CRS (on spatialreference.org)?
1
Description CRS EPSG:6372
3
Optimize OpenLayers2/ Geoserver 2.5 with GeoWebCache - reprojection necessary?
3
How to obtain WGS84 or Projected Bounds for given EPSG in postgis?
4
How to find the extent of (many) EPSG CRSes?
0
ETRS vs ETRF and EPSG
2
gdalwarp from epsg:4326 to epsg:3413; error: Too many points failed to transform, unable to compute output bounds
2
EPSG:3575 formulas