Using ArcGIS 10.3 I have a dataset containing polylines of a pipe network, along which I have a polygon layer representing a burst every 50m. The burst layer contains a value (p) and a unique ID (the center-point x_y).

For each pipe in the dataset I want to join the max. p value that it intersects, but also take the unique ID so that I know which burst event is the worst for any of the pipes. A standard spatial join will output the max. p value but not the ID.

So, in the image below the highlighted section of pipe intersects 4 burst events, I can do a spatial join to link the max value of 9 to this pipe, but how do I also record the unique ID of X_Y - in this case 4,2? 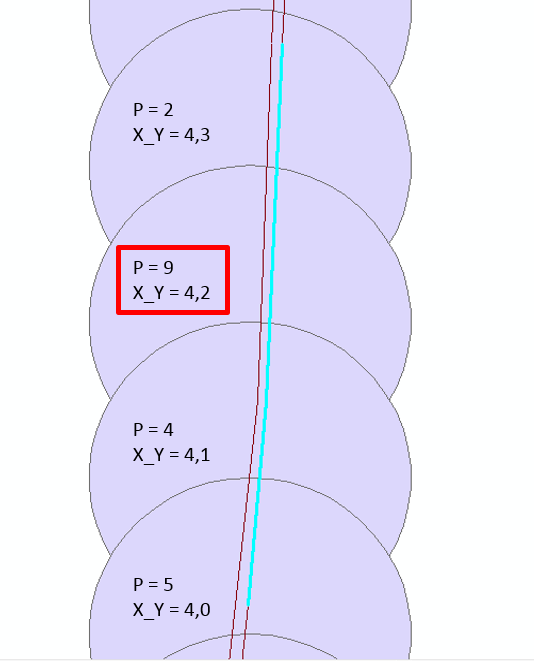 The output of my tool will create a CASE_ID field with a positive unique ID to each segment in the One to Many output that matches the Summary output. A value of -1 will be applied the CASE_ID field for all segments that do not match on the Max P value. You can extract the set of segments with positive CASE_ID numbers from the One to Many output. The result will contain the segment ID along with the Polygon ID and P value of just the polygon with the Maximum P value for the segment. Unless multiple polygons associated with a segment have the same Max P value there will only be one of each segment in the final result.

I have ended up using a solution outside of the Arc software:

The first step was to intersect the pipe layer with the bursts to get sections of pipes recording all of the individual burst properties. A unique ID was then added to identify each of these parts.

In excel a pivot table was created listing all of the pipe ID's along with the maximum P value. A VLOOKUP was then used in the raw data to check if the P value for each record matched the max value providing a true or false. This resulted in a list of pipe sections that intersected the max P value.

It was then possible to bring this back into the GIS and pipe geometry using the unique ID.

However, what I then wanted to do was link the pipe ID back to to the relevant burst layer - so essentially switch the geometry from the line to the polygon. Since there is no way of doing this in Arc the data was dropped into PostGIS (by a colleague).

Not the answer you're looking for? Browse other questions tagged arcgis-desktop attribute-joins arcgis-10.3 spatial-join or ask your own question.

5
Performing spatial join between lines that travel along each other in ArcGIS Desktop?
0
ArcGIS Route Analysis
3
Spatial Join with aspatial conditions
1
Sum line segments in overlapping polygons with Spatial Join
2
Spatial Join if more than 50% of join feature overlay target feature?
1
Is there an alternative to Spatial Join that does not create a new feature class?
3
One-To-Many Spatial Join With Tabular Output Only?
2
Understanding Join Data vs Spatial Join?