Dissolving polygons based on attributes with Python (shapely, fiona)?

I have been trying to create a function that does basically the same thing that the QGIS "dissolve" function. I thought it would be super easy but well apparently not. So from what I have gathered around, the use of fiona with shapely should be the best option here. I just began to mess around with vector files so this world is pretty new to me and python as well.

For these example, I am working with a county shapefile founded here http://tinyurl.com/odfbanu So here are some piece of code I gathered but can't find a way to make them work together

For now my best method is the following based on : https://sgillies.net/2009/01/27/a-more-perfect-union-continued.html. It works fine and I get a list of the 52 states as Shapely geometry. Please feel free to comment if there is a more straight forward way to do this part.

So the writing is really not straight forward from what I have seen, I really just want the same shapefile only with the country dissolve into states, I don't even need much of the attribute table but I am curious to see how you can pass it on from the source to the new created shapefile.

I found many pieces of code for writing with fiona but I am never able to make it work with my data. Example from How to write Shapely geometries to shapefiles? :

The problem here is how to do the same with a list of geometry and how to recreate the same properties than the source.

The question is about Fiona and Shapely and the other answer using GeoPandas requires to also know Pandas. Moreover GeoPandas uses Fiona to read/write shapefiles.

I do not question here the utility of GeoPandas, but you can do it directly with Fiona using the standard module itertools, specially with the command groupby ("In a nutshell, groupby takes an iterator and breaks it up into sub-iterators based on changes in the "key" of the main iterator. This is of course done without reading the entire source iterator into memory", itertools.groupby). 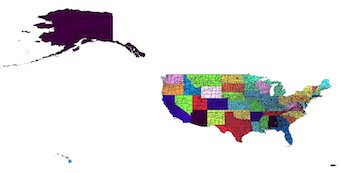 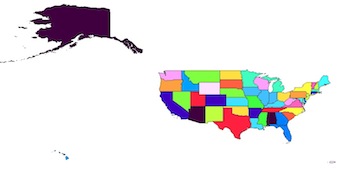 I highly recommend GeoPandas for dealing with large assortments of features and performing bulk operations.

It extends Pandas dataframes, and uses shapely under the hood.

As an addendum to @gene's answer, I needed to dissolve by more than one field so modified his code to handle multiple fields. The code below utilizes operator.itemgetter to group by multiple fields:

Not the answer you're looking for? Browse other questions tagged python shapely fiona geopandas or ask your own question.

4
MultiLineString to separate individual lines using Python with GDAL/OGR, Fiona, Shapely
3
Adding a Property (attribute) to a geometry in Shapely/Fiona
6
Shapely/ Python looping through a number of polygons
4
Fiona + Shapely: Loading a set of LineStrings and writing their centroids to a shapefile, including original properties
18
Rasterize a shapefile with Geopandas or fiona - python
3
Define Shapefile Projection with Shapely/Fiona
3
PostGIS linestring to shapefile error with shapely/fiona
1
Dissolving polygons based on multiple attributes with Python (shapely and fiona)?