When running this model on a path with no numbers in it, it runs fine.

I also tried using the the calculate value tool again to replace the truncated characters with the correct ones, and still it breaks the model.

There is some issue with calculate value not accepting numbers in path names.

Can anyone help with this issue? 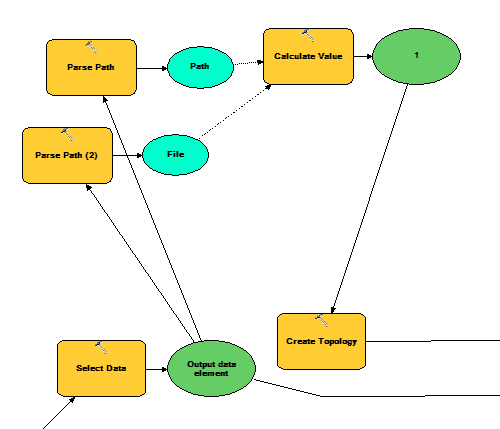 In Python, a backslash in a string always signals the presence of a special character. For example, a "\t" will be interpreted as a Tab.

I tested your "Calculate Values" expression in ModelBuilder with a path of "C:\Workspace\trash\temp.gdb\poly", and my result was "C:\Workspace rash emp.gdb\poly". Each "\t" was changed to a Tab.

To prevent python from interpreting characters after the backslash as a special character, add an "r" before the string. The version of the expression below calculated the correct string.

Not the answer you're looking for? Browse other questions tagged arcgis-desktop python modelbuilder geoprocessing topology or ask your own question.