If I run this script:

from ArcGIS, the output is: 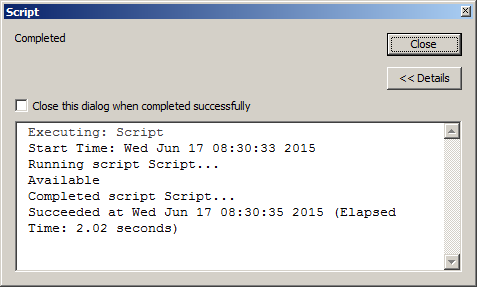 When I run it as stand-alone script, it is very different story:

How do I access Spatial Analyst extension from a stand alone script?

The method I use is:

and then at the end of your script:

which is generically what Ken said, the issue here seems to be that for some external reason arcpy cannot get a license... when using arcpy.sa in a standalone script it is possible to have more than one license checked out (perhaps that's a bug worth reporting to Esri).. check your task manager to ensure there's not ArcCatalog/ArcMap that's half crashed and still holding a license, script windows that have not been exited and also editors that have imported arcpy (PyWin does this if you import arcpy in the interactive window).

Worst case restart your computer... it's amazing how many things that fixes.

I believe you also have to check out the extension.

Not the answer you're looking for? Browse other questions tagged arcpy spatial-analyst error-000824 or ask your own question.

6
ArcGIS License - ArcInfo level license set during python script execution vs via Desktop Administrator
0
How can I reclassify an integer raster to a float raster?
0
How to use the local macro to do ZonalStatisticsAsTable in batch
3
After ArcGIS 10.2.1 update, Arcpy 64 bit import Error
0
Spatial ETL Tools won't run “AttributeError: 'module' object has no attribute, etc.”
4
Checking if ArcGIS extension has already been checked out manually in ArcPy?
2
Creating Match Table using ArcPy gives ERROR 000090: Error creating table, workspace may be read-only?